Patty knows when I need to get out on an adventure and I finally had the time last weekend. It’s not that I don’t enjoy little league games, graduation parties, piano recitals, musicals at the Jewish Community Center, and Girl Scout parades but I like to get out once and awhile and have a good adventure. Patty encourages me and fully supports my need to get out and do stuff so after showing myself at a neighborhood party for a respectable length of time I got into the preloaded car and headed north to Island Pond.

I had contact my friend Russ earlier in the week knowing that he had done most of the section previously. I was looking for any information that he might have, he basically agreed with the NFCT maps and guide, he gave me a little more detailed info on where take-outs were for the portages and some useful information about some tricky bits of whitewater. He than subtly mentioned that he might be available for the day.

We finalized plans on places and times to meet, the convenience store across from the Clyde River Hotel at about 9:00. There is no cell reception in Island Pond or anywhere near it as far as I can tell. We met right on time, Russ brought his two boys ent(10) and Sterling (12), his friend Remi, his dog Millie, a small tandem, a solo canoe and a solo decked canoe. 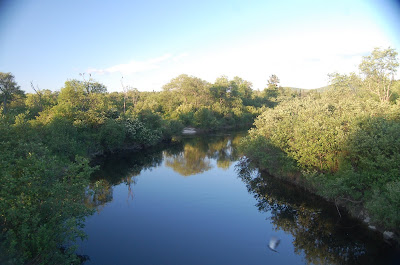 We set out for the put in, unloaded the canoes and shuttled a car to the beginning of the one mile Old Stone Dam portage that bypasses some class III-IV rapids. Russ is a much more experienced and smarter paddler than I am. I had thought we would leave a car at the take-out and it would be smart to leave a cart at the portage so I could wheel my canoe and not carry it. Russ pointed out that we might as well just use our cars for the shuttle and save a lot of energy. Duh! 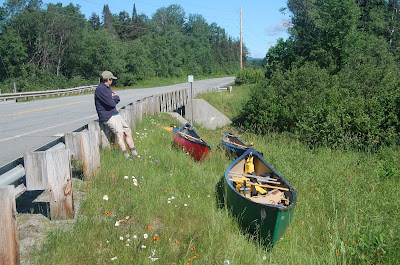 The weather was perfect, I really mean perfect. High 60s and clear with a breeze form the northwest. The Nulhegan has no USGS gauge but the Clyde River gauge in Newport was about 270cfs. The Clyde and Nulhegan both originate near Island Pond, the Clyde flows west and the Nulhegan flows east. I figure the Clyde gauge will give a paddler an idea of what the levels are on the Nulhegan. The gauge showed the Clyde slightly higher than normal for the time of year. I would say that this is the absolute minimum you will need in order to paddle the Nulhegan, higher water would be better. We ended up lining and dragging over several sections and did a lot of bumping scrapping, and grinding as well.

The first several miles of the river are very pretty and similar to the section from Nulhegan Pond to Wenlock Crossing. Immediately after the put-in a branch stream enters adding water to the main stem. The current is steady and the river meanders a great deal. Four canoes and five people are not ideal for seeing wildlife but we did manage to see plenty of birds and lots of tracks in the sand including moose and bear tracks. Occasionally you could hear a truck or herd of motorcycles on Vt 105. 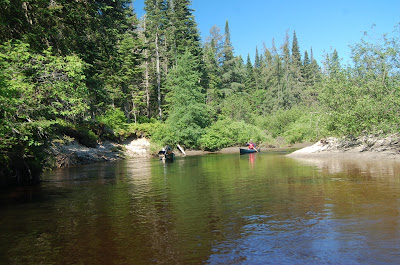 When you see a few big boulders in the stream you have reached the beginning of the whitewater section. It would be great if the NFCT could get a walk in access point here, it’s only 100 yards from the road and would enable paddlers and fisherman access to this beautiful section of water without having to commit to the much more serious whitewater below. 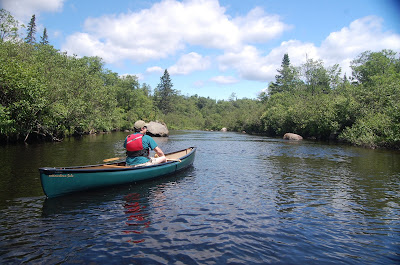 The next section started out with a few easy and short sections of white water leading to a longer section that grows more difficult as you near the RR bridge mentioned in the guide book and map. The water was low enough that we all did some serious bumping and grinding through this section. I chose to take the right side around an island which was a definite mistake. I ended up lining down to the RR bridge pool. 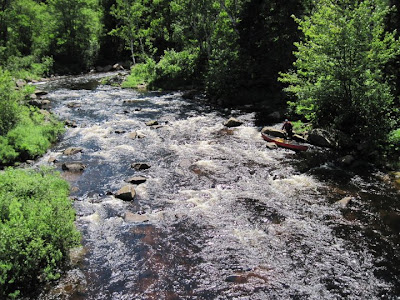 The rest of the crew had a little more success on the left side of the island. The take-out for the Upper Gorge Portage is at the very tail end of the pool below the RR bridge, I think you would be sad if you missed it especially in high water. The carry is short and ends at a nice pool full of brook trout; Sterling had good success fishing here. 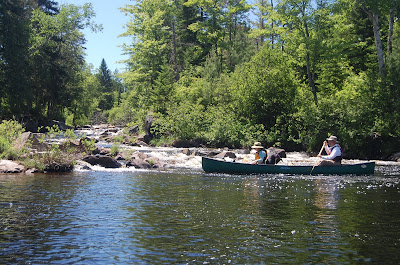 We met up with through paddlers Justine Jarvis, TK and Moxie the dog at the take out. I have exchanged emails with Justine on several occasions. It was unbelievable that we met up with them. Throughout the rest of the day we played leapfrog as we passed each other on carries and rest stops. They are paddling and Old Town Tripper and used a much more aggressive ramming technique on the bony rapids, it seemed to work quite well. 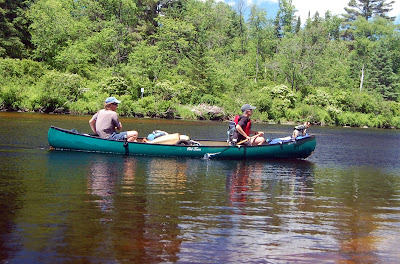 After another short set of rapids we stopped on a sand beach and had lunch with Team Moxie and swapped trail stories. The dogs played in the sand and water and the humans enjoyed the sunshine and cool breeze.

Almost immediately the rapids began again and we had various degrees of success paddling them. Russ and Ent were in the tandem and did very well as did 12 year old Sterling in the decked canoe. Remi and I had a bit more difficulty. I did OK for awhile but eventually got hung up on a rock while upstream Remi broached his canoe and it slowly filled with water. I stopped and headed upstream to help. I’m still not sure how he did it but he managed to get the boat unpinned by himself, he’s awfully strong for a small guy. He passed me as I returned to my canoe. He collected his dumped gear as he went. I started out and only made it a short way before taking on about 4” of water. I had to stop and dump out the boat. I ended up lining the rest of the way down to the end of the rapid. 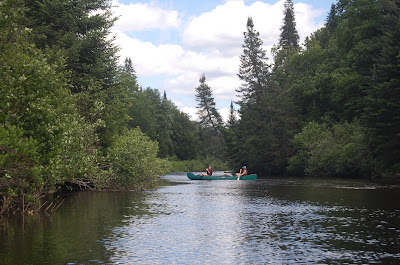 I’m not sure if he was trying to make me feel better but Russ has done this section before and said it was easier with more water. After this long section of rapids there is a mile and a half of flat water leading to the take-out at the Old Stone Dam and Rte 105 bridge. We shuttled the 1 mile using our cars. Them NFCT map says to put-in by a bridge over a feeder stream that leads .5 miles back to the Nulhegan below the Class IV lower gorge. Russ had learned that if you go another 200 yards past the bridge there’s a new trail that leads to a picnic site that avoids some of the shallow stream. We put-in, paddled, and scraped down to the confluence with the Nulhegan. 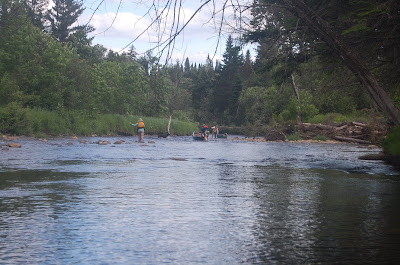 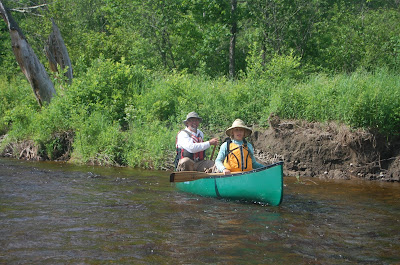 The next 2 ½ miles of river were some of the finest I’ve ever paddled. The weather was perfect, the company was great, the water is crystal clear and the paddling is fantastic. The river is a bit bigger here and flowed along at a nice steady pace with occasional riffles and easy rapids, the banks are forested and the river meanders enough so you get new views every few minutes. Near the end there is a very nice RR bridge to pass under and the take-out is close to the cars and a short walk to a general store that sells ice cream. Anyone who plans on paddling the Connecticut River section of the NFCT should consider doing the last section of the Nulhegan as well. 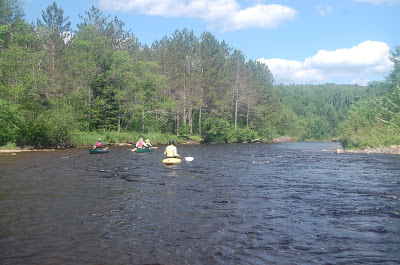