I left work early on Friday for the trip north to the Adirondacks to start my trip from Axton Landing to Saranac Village. On a very hot and humid day things did not start out well when my AC quit working about 2 hours into the trip. I went from cool and comfortable to hot and sweaty very quickly. I arrived at Raquette River Outfitters at about 5:00pm and after some last minute purchases and discussions we decided that the best shuttle plan would be for me to drive to the put-in at Axton Landing with a driver who would return with my car to Saranac Lake where I would end my trip three days later.

I quickly loaded up the boat and headed up the Raquette River a short distance to the mouth of Stony Creek and the NFCT. I wasn’t sure where I was going to spend the night but since I was alone I wasn’t really too worried.

It was noticeably cooler on the water and the paddling up the creek was very pleasant. The sky was getting darker from storm clouds but it wasn’t too threatening. I didn’t hear any thunder and a breeze made it feel nice out.

The stream is supposed to be difficult to follow and I was advised to go left whenever in doubt. I found it very easy to find my way and the flowing grass was an obvious giveaway. I can see how finding the correct channel might be more difficult with higher water in the spring. I arrived at Stony Creek Ponds and headed to the north end to find a camping spot somewhere on public land. I hadn’t been to the Adirondacks for several weeks and I was happy to find that the water lilies and pickerel weed were blooming.

I was surprised to find an open campsite across the bay from Indian Carry. I set up camp quickly and put on a pot a water to get dinner started. I had planned to eat dinner in town but because of the shuttle situation I bought a single serving freeze dried meal, Pasta Primavera. It tasted pretty good but I really wasn’t too hungry; probably because of the heat. 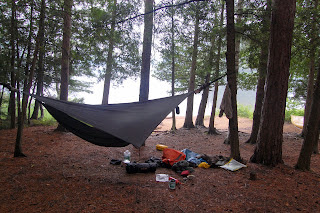 As I was eating dinner I watched some folks in kayaks and a couple fishing out of a canoe who were having some pretty good luck. Stony Creek Pond has only a handful of houses on it and I couldn’t see any of them from my site. I reorganized my stuff and made everything waterproof for the night. I climbed into bed and read for awhile. Right after dark there was a great set of loon calls, it cooled off quite a bit and I looked forward to a good night’s sleep.

Sometime in the night the wind picked up, the sky lit up, the thunder started up, and I got up to make sure everything was buttoned up. I wanted to lower the fly of the hammock to makes sure I stayed dry. As I was moving the guy lines I stepped on something soft and I heard a combination crunching and croaking sound. 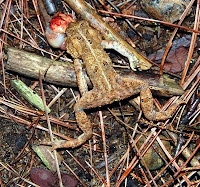 It’s not a good sound and sensation to experience in the middle of the night barefoot in the rain. I quick look around with the headlamp revealed a recently murdered toad. I went down to the lake and washed off my foot and headed back to bed a little bit wet from the rain but it felt good. Now when I tell the kids they always have to wear shoes I can tell them they might step on toad by accident

I woke up to a cloudy, foggy, humid, and warm morning. I wasn’t hungry at all so I made a cup of coffee and started to get things organized and packed up. A short paddle led to Indian Carry a 1.1 mile portage to Upper Saranac Lake. The first half of the carry is uphill and I was soon soaked with sweat. The trail is wheel-able but

I still needed to work the cart over logs and rocks. After crossing Rte 3 the second half carry follows a gravel road to the put-in. I stopped to pick some wild strawberries growing along the roadside.

The deerflies were horrible. I am not bothered much by mosquitoes and black flies but deerflies drive me crazy and seem to be strongly attracted to me. Maybe I resemble or smell like a deer although I certainly don't run like one. I was happy to put in on the peaceful and quiet Upper Saranac Lake. 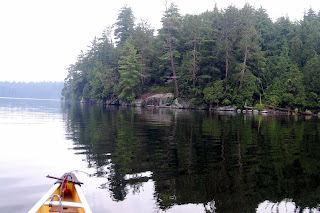 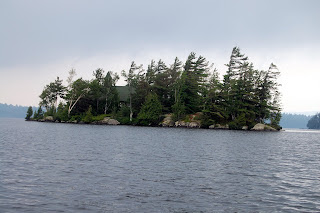 I stopped by a lakeside cliff to do a little fishing and caught a couple of small Smallmouth Bass. I passed a house on the north side of the bay that I should own in my next life. There are lots of beautiful housed on this lake that are built to blend into the surroundings. 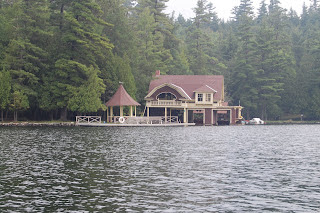 If people are going to build lakefront property I wish they could do it like this rather that built huge McMansions that scream “Look at me, I’m really rich”. As you get to the end of the bay someone has put up a 4X8 foot, not so subtle sign pointing to the carry. Probably a bit of overkill but there must be a reason behind it. When I got to the take-out it was a very pretty little spot.

Up the road, down the hill and left on a trail through the woods led to a deerfly infested put-in. As quickly as I could I was onto the Saranac River on my way to Middle Saranac Lake. When I got to the lake it was very smooth and there was little wind. 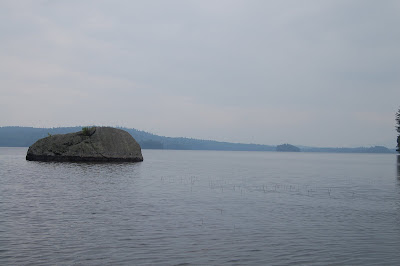 I set a direct course down the middle of the lake headed for the outlet at the other end. The wind began to pick up and I headed south to be nearer to the shore and safety. I got to test my sailing skills with my new “WindPaddle” and was soon doing 4-5mph without having to paddle. By the time I got to Bullrush Bay and the outlet there were whitecaps and waves a foot to 18 inches high. I was glad to get into the river and off of the open water.

Up until now I had only seen two motorboats in the distance on Middle Saranac. While on the river I enjoyed looking at the water flowers but there were several motorboats headed in the other direction who did not. The speed limit is 5mph and I was the only one who was close to obeying it. After about a mile I came to the locks and had a nice conversation with the attendant as he efficiently did his job letting me down into Lower Saranac Lake. 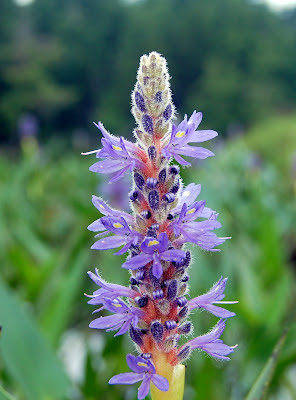 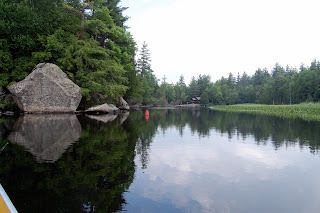 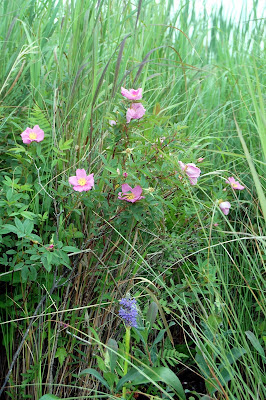 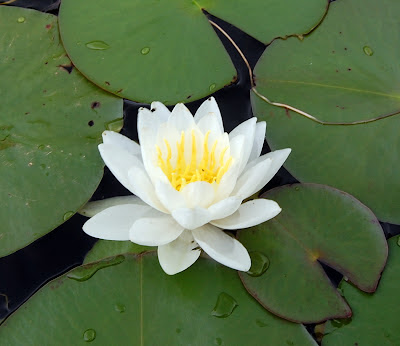 It’s a totally different world on this lake, full of powerboats and lots of campsites. There were people everywhere, I still enjoyed my paddle through Lower Saranac and its many islands very much. Great views of the surrounding mountains.

The entrance to the Saranac River is easy to find opposite Bluff Island and its 40’ south facing cliff, I decided that I was going to finish the trip that day rather than have to find a place to camp and listen to the motorboats the rest of the day. It was still early and I had some crackers and cheese for lunch, I also drank lots of fluids to try and stay hydrated. In my rush to get started the night before I had left my hat in the car and I was starting to get a bit of a sunburn now that the clouds had cleared. 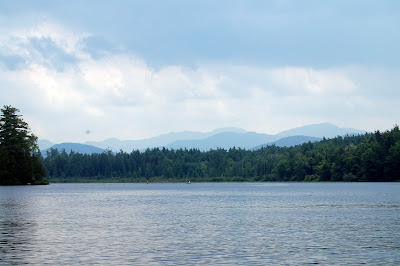 The section of river down to the lower locks was really pretty and I had a nice time following it downstream. Unfortunately there are lots of channel markers to look at and lots of boats going well over the 5mph speed limit. I suppose I expected it would be like this but I was hoping it would be a bit more peaceful. This would be a great trip if you could do this section midweek or in the off season when there are less people around.

Unlike the upper locks which are manually operated the lower locks are mechanized, the attendant was very friendly and we talked as he did his job from inside a booth. I did some more sailing down Oseetah Lake as I headed toward the narrows that lead to Lake Flower.

These two lakes have lots of houses on the shore and there were lots of boats around. I passed three canoes with dads and kids headed up stream and upwind, they weren’t making great progress and they told me they were headed to Lower Saranac to camp. I wonder if they ever make it to their campsite? The Dads looked tired, their technique wasn’t very good, and they were about to round a corner into a strong headwind. 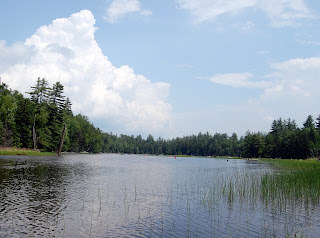 Paddling on north into Lake Flower and passing several buzzing jet skis led me to the take out left of the dam at the park in Saranac Lake just after 3:00pm. I wheeled the canoe down the street to the river walk and then to the town lot where my car was parked. I loaded up in the sweltering heat of the blacktop. I headed to Duncan Donuts for some coffee to keep me awake for the ride home.