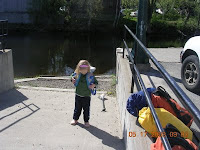 Sally and I went for an overnight canoe trip in the Adirondacks this weekend as our first section of the Northern Forest Canoe Trail.. We drove over Friday night in the pouring rain and stayed in a motel near our put-in. Saturday dawned sunny and cool, perfect weather for a paddle and hopefully the breeze would keep the early season blackflies under control. As it turned out the bugs were a non issue until I had to load the car at the end of the trip. We started at a local outfitters store right on the river and for a fee they even move your car to the take out for you.

The first mile on the Saranac River has two short rapids, one of them is an easy class II. Sally thought it was fun and I was a bit nervous because the consequences of a dump could be serious with a six year old. 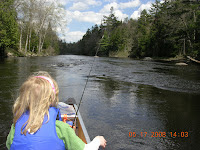 After that the river goes for several miles winding it’s way through a broad valley. It was very pretty paddling with great views of the nearby mountains. We saw lots of different ducks and heard lots of warblers singing for mates and establishing territory. The spring flowers were out and the apple trees were especially nice and very fragrant. The area we were in is all old farmland and at this point we were never to far from a road. We passed under a few bridges and passed by the occasional camp 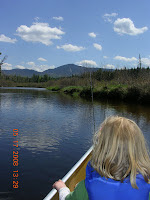 . The current is steady so we moved along at a nice pace without to much effort.

After about 4 hours there is a decision to paddle a mile of class II and III white water called Permanent Rapids or carry around it. We obviously chose the carry and I got to try out the new canoe cart I purchased earlier in the day. These carts are collapsible and if you have relatively smooth terrain make the portages wicked easy. 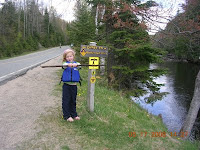 The cart assembles in about 3 minutes and is strapped to the canoe, roughly in the middle. You pile all your stuff in, including a six year old if she wants, and off you go pulling the boat behind you. Without the cart I would have had to do the carry at least twice to get all my stuff to the other end. While I loaded the canoe back up Sally hunted for frogs. She missed two or three but I caught one and let here hold it, a great father daughter moment.

The weather started to cloud over but by this time it was getting towards dinner so we found a campsite on an island in Franklin Falls Pond. Sally continued her hunt for frogs while I set up the tent and the kitchen tarp, unrolled the sleeping pad, aired out the sleeping bags, organized and 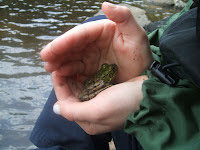 started cooking dinner. By this time it was raining lightly off and on. 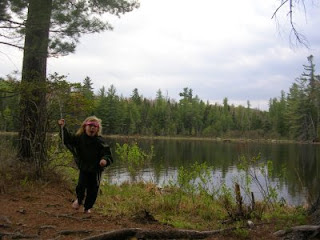 I tested the stove at home and it worked fine, now it was weak at best so after about 45 minutes of messing with it I started a fire and used it to boil the water and prepare the soup and freeze dried beef stew. I have had much better freeze dried meals. Sally entertained herself by poking at the fire and throwing rocks and burning sticks into the lake. We had Hershey’s bars for desert, Sally was mad that I forgot the marshmallows. We experimented with echos for a few minutes.

After dinner I cleaned up and field stripped the stove. I cleaned it and got it working to make us some hot chocolate for bed time. Sally couldn’t wait until dark because I gave her 8 little glow sticks of different colors to play with. A Bald Eagle flew by and we heard a Barred Owl but she was not impressed. We only saw one other canoer (how do you spell this) all day and maybe four or five people fishing. We went to bed at 8:30. I looked at the map until 9:00 and fell asleep listening to the light rain. There is nothing like having your children snuggle up to you in their sleeping bags while you are camping out. 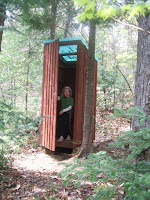 The bird chorus woke me up at dawn. It was gray and very windy which is not a great thing when you have to paddle 10 miles of lakes in a solo boat. I fell asleep for an hour or two and woke up to a beautiful blue sky and a diminished wind. I let Sally sleep and fired up the stove for coffee. I took the tarp down organized the cooking stuff, filtered some drinking water, and began getting the boat ready. The coffee was great and Sally got breakfast in bed, instant oatmeal and hot chocolate. I cleaned up and she played in the water and looked for snails.

Eventually I got everything cleaned up, packed up, and into the canoe and we were off by about 9:00. The wind was still blowing but not as hard. After we got around the island I was a bit surprised to see whitecaps on the lake but it was a tail wind and I 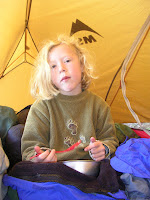 stayed close to shore for safety. Sally sang songs and after seeing a flag at a camp recited the Pledge of Allegiance about 15 times until I told her to take some pictures. We arrived at the end of the three mile lake quickly and loaded up for a .3 mile carry around the dam. Sally rode in the canoe for this portage much to the delight of the two or three passing cars we saw. Everyone was all dressed up so they were probably on the way to church in town.

The put-in was down a steep bank and it took me a while to ferry loads down and repack the canoe. I was very careful to distribute the weight in the boat for a tail wind. Sally was content exploring the shore. She found a dead fish and threw some rocks. I loaded her in and worked the canoe out into some deeper water before I got in. 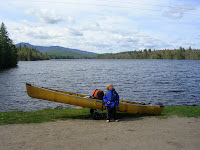 All I will say is that I need practice doing this, no one got wet but it was close. After a short class one riffle we passed the correct put-in which was about a hundred yards further down the road. It had a short slightly sloped bank and a sand beach. Oh well.

The final six miles were on Union Falls Pond. This is a beautiful lake that is oriented east west and has great views of the back side of Whiteface and its neighbors. The lake gets wider as you go east. The lake is formed by a dam at the eastern end and it is obvious that it flooded a forest because many stumps are still visible; it looks like it would be great fishing. 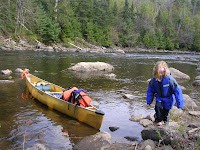 Sailors and other boaters use a term called fetch. It means that if you give even a small wind enough distance it can develop some big waves. Basically I had to paddle quite hard on this lake to keep the canoe pointed in the right direction. As I progressed east the waves got bigger, the upside is that we made very good time. I kept thinking that if I was in a tandem canoe with and adult we could have rigged a sail and done the whole lake even faster with a lot less effort. While I never felt we were in any danger I can see why people can get in trouble in open water.

We finished out trip at about 12:15. Sally played on the beach while I carried the gear about a hundred feet up a hill to the waiting car. We had essentially no bugs on the whole trip because they were waiting here in the woods at the car park. I kept Sally on the beach and brought here her bug shirt. She is a fair skinned little girl and the bugs love her. 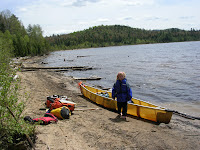 After several trips up the hill I got the car loaded up and got Sally away form the beach and into the car. While driving out I found the proper take-out about 100 yards down the dirt road. It could have driven my car to the windy shore and avoided the bugs in the woods and the uphill walk to the car.

T.F.T.D. Take a minute or two to look for the proper put-in and take out it could make your trip easier.

sounds like overall good trip . makes me want to get out there with my daughter .