After packing on Friday night I woke at 5:00am for the ride up to Umbagog Lake on the New Hampshire Maine border, another section of the NFCT. I bought a large cup of coffee to go and headed north on the interstate to St Johnsbury were I headed northeast across New Hampshire to Berlin and then north to Errol and eventually the put-in at the public landing above the dam on the Androscoggin river. 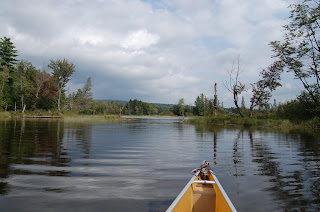 The last hour or so of the trip was a pleasant drive along the Upper Ammonoosuc River and then the Androscoggin. It was nice to see sections of the Upper Ammonoosuc at a much lower water level than we had paddled it earlier in the year. I’m glad we did it when we did in order to avoid having to drag the boats over bony rapids and sandy flats. The Androscoggin River is beautiful and I'm both intimidated and excited to try the rapids. I’m sure we will carry the Class III sections when we do it.

I spoke with the milfoil guard for a few minutes and he told me to keep an eye out for the Bald Eagle where river enters the lake. He gave me a small sticker to put on my boat and was impressed with my knowledge of the issue of invasive plants. I wish I could take credit for research but I've met probably 8 different guards in 4 different states who have all given me literature to read. I usually read it while I’m cooking dinner or lying in my sleeping bag. I have seen the problems that milfoil causes in some of the lakes and ponds near my home so I understand the importance of keeping it out of lakes like Umbagog. 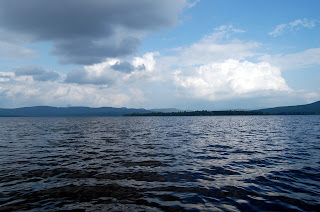 The three mile paddle up river to the lake was uneventful and pleasant, I passed several kayakers who were exploring the side channels and in general paddling at a much more relaxed pace than me. This section looks like a great place to poke around in. I like paddling solo because I can get into a nice rhythm and keep it up for a long time without any distractions. The trees are starting to change along the river and there's a good crop of berries on the Mountain Ash. As with many lakes and rivers I wonder what the Androscoggin looked like before it was dammed and the surrounding area was logged. The section was up river but there wasn’t much of a current and I had a slight tailwind so I made good progress, the lake opens up in a large reedy area with nice views in all directions.

At this point you have to do a 1 ¾ mile crossing of open water to get to the eastern shore and the bay that leads to the Rapid River. The crossing was a non-issue because the winds were gentle and the weather was good. On the lake I saw several power boats but no water skiers or jetskiis. The people using powerboats on Umbagog seemed to be either fisherman or sightseers. The former where either trolling or headed to a location to fish and always gave me a wide berth and a wave. The latter slowed to reduce their wake and also gave a nod or wave to say hello. I admire boaters like this who go out of their way to be courteous respectful of canoers and kayakers. They seemed very happy to share the lake with everyone who was out enjoying it. 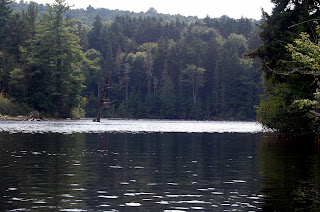 At first glance Umbagog seems to be undeveloped but you soon notice the occasional camp located on the shore but set back behind some trees. Often there is a modest dock and a small powerboat. I suppose I would like all lakes to be without any buildings but if there are houses I like ones like this that attmpt to blend in. After the crossing I headed north around Pine Point and then east down the narrowing bay to the spot where Rapid River enters the lake. 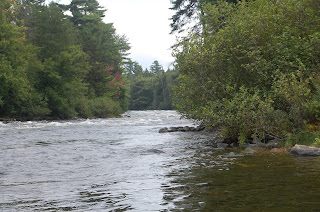 There are several islands to navigate around and some small coves to enjoy. The water is very clear and it’s fun to look at the boulders and cobbles on the bottom of the shallowing lake. As you approach the end of the cove the current picks up as evidenced by the grass on the bottom and the water pushing against the boat. Cedar Stump Campground marks the beginning of the three mile carry to Lower Richardson Lake. I spent some time here practicing my ferrying technique on the last of the Rapid River rapids. 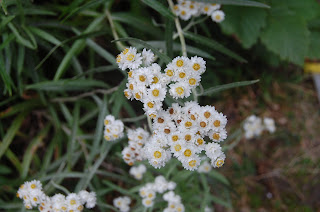 I looked but couldn’t find any NFCT signs marking the beginning of the portage but I did find a decomposed deer carcass. I wonder what the story behind it was, It certainly must have stunk up the campsite for a while but now it was just some bones and fur. 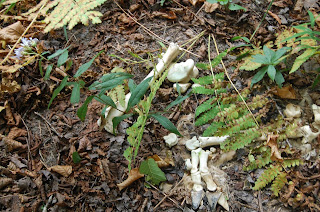 At this point I had to either find a place to camp or head back to the car. Since it was such a beautiful day I decided to head back. I stopped at an occupied campsite and inquired about the portage trail. The campers said that it started where the deer carcass was on what I thought was a fisherman’s trail. The muddy trail soon leads to a fire road that leads to Lower Richardson Lake. The return paddle up the bay was uneventful, I tried to go on the opposite side of the islands that I paddled past on the way up stream. I explored a few backwaters that had lots of Moose tracks on the edges and in the mud on the bottom. Either the Kingfisher population is up or I am seeing the results of a very productive breeding year. There seem to be lots of kingfishers wherever I paddle this year.

The wind had picked up during the afternoon and the trip back west across the lake was much more difficult than the trip over earlier in the day. The waves were probably about a foot high and I had to keep up a steady stroke rate to keep from being blown back. In order to make the shortest crossing possible I traveled south a bit before heading back to the Androscoggin. I passed a pair of very worn out looking kayakers. They asked for directions to the Rapid River and I told them they were close and that they would have a nice tail wild when the turned the corner around Pine Point. I suspect they had paddled the 6 ¾ miles up from the south end of the lake and had taken a wrong turn or two. They looked very tired, I hope they made out OK. 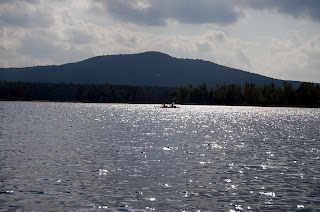 The crossing was challenging but not too bad and my canoe handled the wave easily. Right when I passed the Magalloway River outlet and entered the Androscoggin I saw the bald eagle perched on top of a dead tree in one of the meadows along the river. I passed probably the 6th pair of loons I had seen so far on the trip although I had probably seen this pair on the trip up river. The head wind easily negated any advantage I was getting from the current but I made steady progress and tried to stay out of the wind a much as possible by hugging the shore on the lee side whenever possible. The trip down river was uneventful although very pretty in the early evening.

I reached the car loaded up while I fought the mosquitoes and then headed out. The drive home was pleasant while the sun was still up. Very pretty driving in northern New England. I ended up getting home at about 10:00 but didn’t get to sleep until later because of all the coffee I drank to keep me awake on the ride home. I would recommend this trip to anyone with intermediate paddling skills as either a day trip or an easy overnight. It's about 8 miles from the put-in to the Rapid River. I used NFCT map #8.