Several years ago my brother suggested that I paddle the from south to the town of . Beyond Ashulot it becomes Class and IV as it heads to it’s confluence with the , way beyond my skill as a paddler. 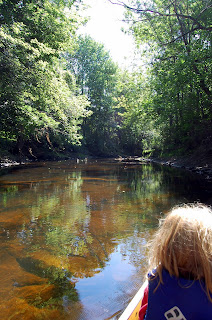 Perhaps it was fitting that Sally and I canoed this river on Labor Day. The Ashulot is a typical small river that powered the early mills, tanneries, and factories that started the industrial revolution in the area. All along our trip were the remnants of old dams and mill foundations as well as abandoned cut granite railroad bridge abutments from who knows when. The roads go through towns that still have the old row houses where the mill workers used to live. We often passed by fields that have been labored in for three centuries by generations of settlers, sheep herders and now dairy farmers. 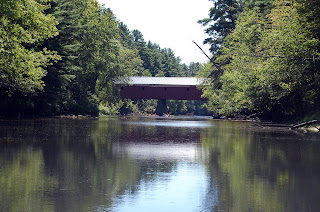 We put in at a small park near some strip malls in right below a dam. The first section is not very pretty but it’s still interesting to paddle through. One side seems to be mostly residential houses and the other is the local college. There’s a foot or bicycle path that follows the river on an old railroad bed occasionally crossing the river on an old bridge. The river is not to clean here and there’s lots of the usual junk on the bottom, the most common being old tires and miscellaneous car parts. There were lots of floating things caught in eddies and strainers, most of it was crap but we did find a really good soccer ball amongst the beer cans and Styrofoam. This was in obvious contrast to the beautiful Cardinal Flowers and surprising number of Kingfishers, Great Blue Herons, Green Herons and other birds. 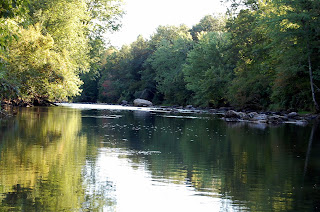 The river become gradually nicer and as you go down stream eventually you get to really pleasant flat water paddling with the occasional short and easy rapids. Sally got to see a Great Blue Heron spear a fish with it’s beak ands them swallow it head first. She renamed some Cormorants “Kickers” because if how they run along the water as they take off. We were going to try and catch a turtle but could never get close enough to one ot make an attempt. 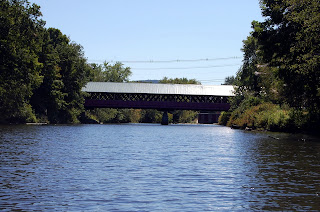 We came to our first covered bridge in Swanzey Station and met up with a family kayaking for the first time. They were trying unsuccessfully to tow a young girl and all of their boats were getting blown around by the wind. Sally and I tried to use our sail but the wind was too irregular for any success. We enjoyed the effort.

A bit further on the second covered bridge in came into view, it was immediately followed by a dam and our first carry. The portage was easy and we put in right below the dam across form a mill of some sort. From the pool below the dam there were a set of bony rapids that led to more flat water cruising through some nice tree lined farm land and Silver Maple forest. 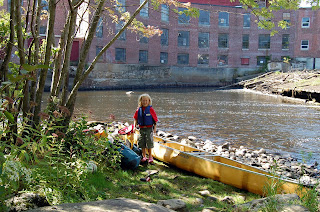 There was a third covered bridge in and a mile and a half later a fourth in . This last one has a fun drop below it. I bet in higher water it is even more fun. For some reason I thought this was going to be about a 12 to 15 mile trip but when I carefully read the guidebook I learned it was going to be about 20 miles. I was starting to feel it in my shoulders. The next landmark was a race cart track just off the river to the east. We couldn’t see it but we could sure hear it. Another 4 or 5 miles got us to a rapids in the . I had to half carry and half drag the boat past this rock garden. I think this one would be a lot of fun with higher water levels. I definitely want to paddle this trip again when there is more water. 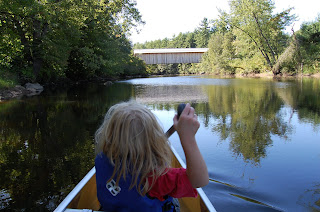 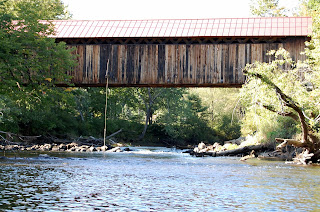 The trip through is kind of cool there are houses on one side and the other side is lined with the back side of the village stores. Sally was fascinated by the rooms that were cantilevered out over the river. I bet it was fun to be there when the river was at it’s spring peak. There was a fair amount of stuff in the river here but not to bad. It’s a short distance after this to the bridge where we were to take out. We had left our car in a drugstore parking lot on the way up earlier in the day before Patty dropped us off in .

I probably should have left the car 2 miles down the road in Ashulot at the next covered bridge but at the time I didn’t want to spend the time hunting around for a good take-out when their was one right in front of me. Anyway it was getting late and Sally was getting hungry and tired. We had some great conversations on our trip and it was wonderful to spend time alone with her. After the take-out we loaded up and stopped at a nearby hot dog stand for some dinner and a treat. Sally got to try cole slaw which she said was spicy but good and I got to drive an hour and a half while listening to the Redsox. It’s one of my favorite things to do, drive home on a cool summer evening, tired after a great trip, while listening to the Sox and drinking a cup of good coffee. Sally slept.