First off I would like to thank my brother and parents for watching the kids so Patty and I could take off for a long weekend of paddling by ourselves. Our options for sections of the NFCT to paddle are getting smaller because I am running out of new places to go that are within a reasonable driving distance from home. 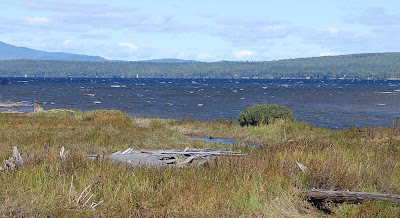 This would be our first “big water” section of the trip and the first time I had canoed on any large lakes since the late 60’s when I was a camper on Lake Winnipesauke in NH. We originally planned to start at South Arm and head to Rangeley trying to take advantage of the west to east winds. Sometime on Wednesday night a front came through and there were VERY strong winds out of the north which made paddling north on Lower Richardson dangerous and probably foolhardy. We altered our plans and drove to Rangeley to do the trip in the direction suggested by the NFCT folks. With the wind out of the north we could hug the north sore of Rangeley Lake and be protected from the wind.

After saying goodbye to my nephew who helped us with the shuttle and talking to a very nice elderly man about the trail we headed west along the lee shore. None of my pictures show it but there were large whitecaps out in the lake that were very intimidating. We passed by several houses with interesting docks. These were made with a wooden cribwork around a large pile of rocks. The crib work had planks attached to it at about a 30 degree angle to the water. Obviously this was to protect them from ice in the winter. In all our travels across NY, VT, and NH this is the first time we had seen these. 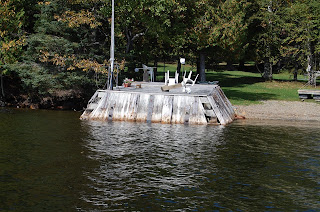 The trip across Rangeley was uneventful, we had to cross a few small bays where the waves were bigger and the wind was stronger but nothing to serious. At the west end of the lake the trail heads northwest into the bay leading to the first portage. This turn exposed us to the full force of the wind and for the first time I was a bit worried. We stayed close to the shore while we fought the wind and waves and eventually paddled into calmer water. I took no pictures of this as I was busy paddling and keeping the boat headed in the right direction. Right at the takeout we saw our only motorboat of the day, a tour boat full of cold looking folks all bundled up in warm clothes and life preservers.

We got the boat ready for the portage and ate a snack while we rested in the warm sun on the public dock. We had it all to ourselves except for one friendly duck. The kiosk had an old NFCT trail marker on it from when the trail was only 700 miles long and the canoe on the logo had only one fir tree in it. 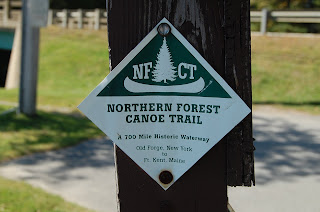 We started the portage and immediately stopped at an outfitters and bought some gifts for the kids. A little further down the road we stopped at the Oquossoc Grocery Store and bought a grinder for lunch. Very good. 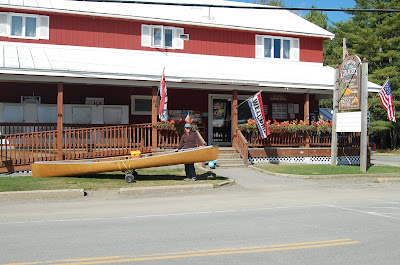 We got the usual odd looks from people who have never seen people portaging a canoe before. After lunch on the deck we finished the carry at Haines Landing. One person stopped to offer us a ride, we politely turned them down. As usual all the folks we met were very friendly. 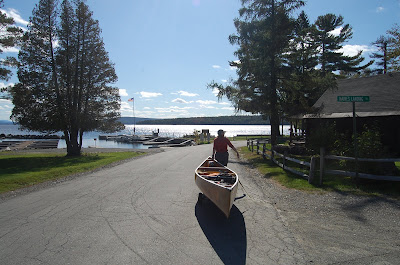 At Haines Landing we entered Mooselookmeguntic (Moose Feeding Place in Abanaki) Lake. Unlike Rangeley this lake runs North/South and we were faced with the full force of the wind. Even though the wind had let up a bit it was still quite strong and the waves were intimidating but probably only 2 feet at the most. We decided to head north along the shore towards Cupsuptic Lake to the spot where we could make the crossing at the narrowest point. The crossing was not as bad as I anticipated, the wind was gradually abating and we passed quickly to the more protected western shoreline. 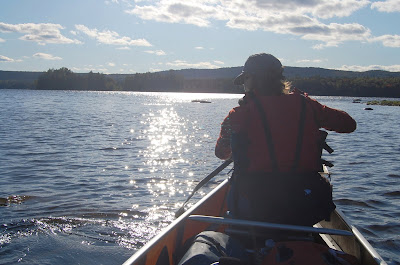 Now we were headed south and Patty got to try the sail which worked quite well at times. By this time it was getting later into the afternoon and the wind was getting weaker all the time. Mooselookmeguntic as a very beautiful lake with long stretched of wooded shoreline. We began to look for a campsite; Patty was adamant that we find one that would get the morning sun. The weather forecast was calling for temperatures in the low 30’s.

Eventually, after paddling around the archipelago on the west side of the lake, we found a campsite acceptable to both of us. We did run aground a couple of times looking. I think that the powers that be are lowering the lake level for the winter. By this time the wind had mostly stopped and the loons were out in little rafts getting ready for their trip south to stay in open water. The temperature also began to drop as the sun went behind the trees to the west. 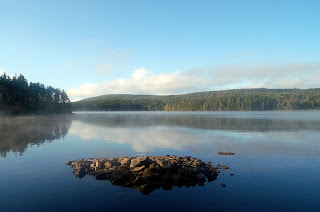 We have had lots of practice setting up camp this summer and it was especially easy without the kids, Patty began dinner and I set up the hammocks. It was a beautiful site but I’m glad we were not sleeping on the ground. There was not anywhere that was flat without any roots. This site was very clean as were all the sites we saw on this trip although it was obvious that they were well used. We are used to packing lite although on this trip we didn’t have to. We each brought a personal pack with our clothes, sleeping bag, hammock, and personal gear and we had another small pack with the cooking gear, food, first aid, and miscellaneous stuff. We were using my brother’s 17.5 foot tripping canoe so we had lots of extra room. Since we were on a small island I didn’t worry too much about the food at night only hanging it high enough to keep the rodents away. We had a small fire and went to bed early. 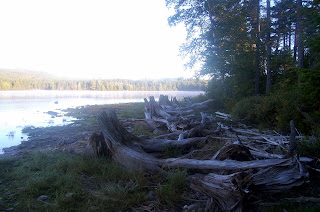 I don’t think it got below freezing during the night but it got close. We both stayed warm, I got up early and Patty slept in to about 8:00 before I woke her up. I find hammocks comfortable to sleep in and very comfortable in the morning. While Patty was still sleeping I circumnavigated the island and took some picture in the fog. The best part was watching a squadron of common mergansers swim by looking for breakfast. Patty cooked coffee and oatmeal while I packed up the hammocks and got the gear ready to pack into the canoe. 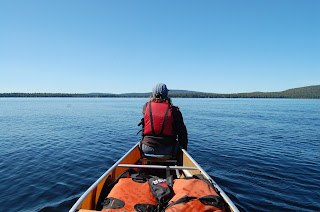 What a difference from the previous day. No wind and a calm lake to paddle in the morning. It was a cool morning with a warm sun, perfect for paddling. We cruised quickly ands easily down to Upper Dam and the carry to Upper Richardson lake. We spent some time looking at the dam and watching the fishermen below it. 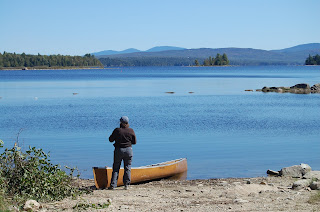 Lots of casting but we didn’t see anyone catch anything. 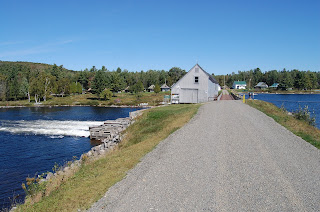 I checked out the Porta-potty and Patty got the gear ready for the carry. We read the memorial for Carrie Stevens and walked the 200 yards to the put in. Portages don’t get much better than this: wheelable, short, nice view, picnic area, clean toilet, well marked, nice little beach, wow, the perfect carry. I stole a picture of this carry in April for another blog when it wasn’t so nice. 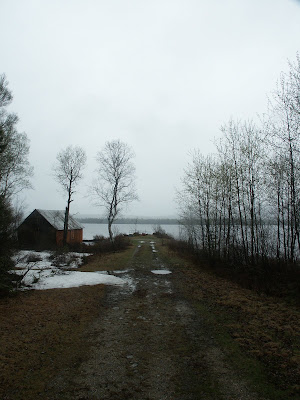 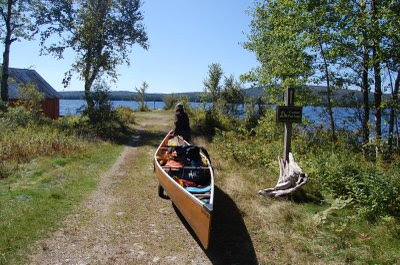 The end of the portage was beautiful so we had some lunch and I took a nap while Patty did some stretching exercises for her injured hamstring muscle. I guess I was snoring quite loudly so she had to move away to get some peace and quiet. She also filtered some water for the afternoon. We continued down Upper Richardson along the eastern shore, more long distances with few if any cabins. These lakes are certainly more remote that the lakes the in NY and VT. Gradually we came upon some beautiful long sand beaches that reminded us of the Caribbean except much cooler with pine trees. We missed the kids and talked about how much they would have liked this section. They would have loved running up and down the beach and swimming in the lake. 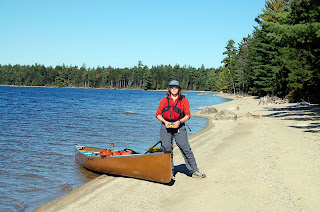 Our campsite had a nice beach and a beautiful spot for me to set up my hammock right near the water. Big moose tracks on the beach. 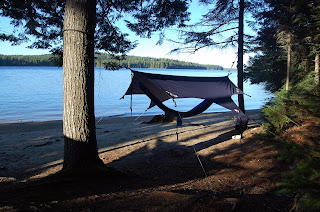 There was a nice fireplace, a picnic table, a crapper with a view, firewood, and no bugs. Life doesn’t get much better although we did discuss bringing the kids next time. This would have been perfect for them. After we got everything set up and organized we walked around the point and were surprised to see how big the waves were and how windy it was on Lower Richardson Lake. We hiked back to the campsite through the woods and collected firewood. 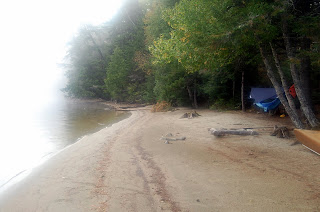 Dinner was freeze dried but it tasted great after a day on the water. Patty built a fire and I totally burned a freeze dried Apple cobbler desert. I think the pot is ruined but we will keep trying to clean it out, it may take weeks. We started a fire and Patty stayed up writing a trip report for the kids and drawing pictures to go with it. I’ve known her for at least 20 years and didn’t know she could draw so well. I went to bed early as is my routine on trips and read for awhile before I fell asleep.

Another beautiful foggy morning although the loons were a bit loud. I was up first again and got the stove going to boil water for coffee. Patty was soon up and we ate and got packed up earlier than the day before. There were no new moose tracks but as soon as we paddled about 50 yards a bald eagle flew out of a tree near our campsite. 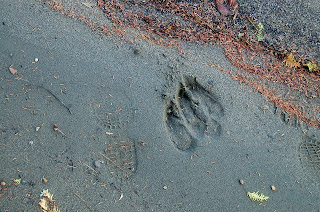 We paddled along the eastern shore of Lower Richardson Lake as the sun slowly burned off the remaining mist. This was Saturday morning so we saw a half dozen boats on their way out to go fishing, we didn’t see any other canoes on the whole trip. 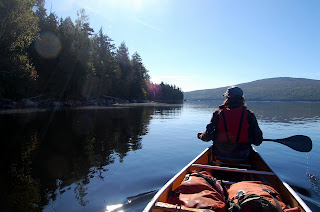 The remaining several miles down the Lower Arm has more camps and cottages than the rest of the lake but they are fairly unobtrusive. Lower dam is in the distance to the west, the NFCT heads that way where a three mile carry leads to Lake Umbagog. We took the route to the south where we eventually came to the public boat launch where are car was waiting. 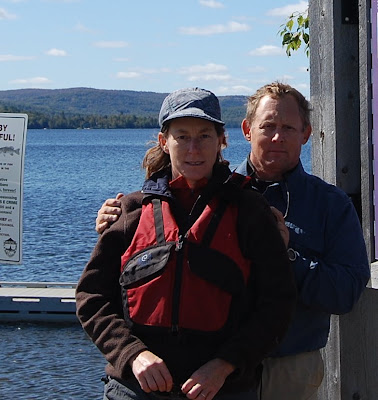