I took some time on Sunday to do a local paddle on the Connecticut River from Holyoke to Springfield MA, about 9 miles. I was pleasantly surprised with the scenery and wildlife. The only real drawback was the noise from the nearby roads. The afternoon/evening was almost windless and I passed only 5 or six powerboats, all except one were anchored and the folks aboard were fishing. 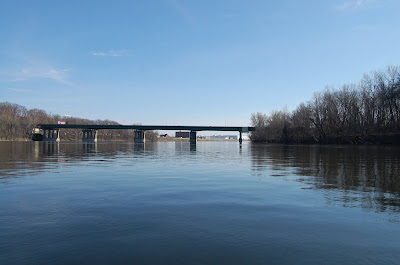 Soon after setting off I passed a large nest with what I think was a bald eagle in it but it could have been an osprey. I couldn’t see very well because the nest was back lit by the setting sun and I was on the wrong side of the river. I soon passed under the I-91 bridge and headed into Springfield.

I saw people pretty regularly on the east side of the river. Some were fishing, some were walking or riding bikes and some were just relaxing on a nice spring evening. I observed a great blue heron, at least three sets of wood ducks, and a kingfisher. Later on I saw a woodchuck and lots of beaver signs in downtown Springfield behind the Basketball Hall of Fame. I passed the North End Bridge and the rail road bridge before approaching the Memorial Bridge. 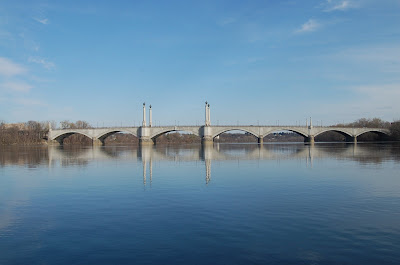 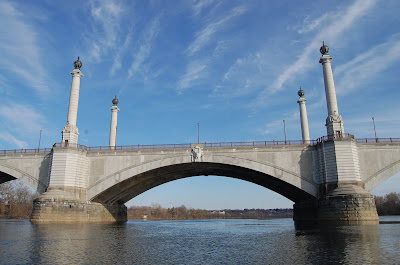 The Memorial Bridge in Springfield is really quite beautiful; on the center arch is a fantastic frieze of and eagle that is seen only from the river and probably really only noticed and studied by folks in slow moving boats. 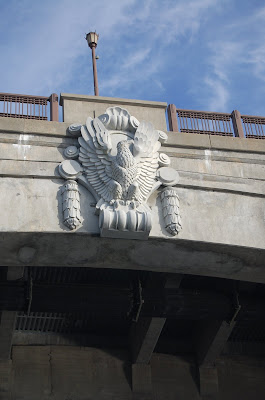 After the bridge are some steps that lead down to the river that make canoe access really easy, I’m not sure what their intended purpose is.

Along the eastern shore extending from just beyond River Front Park and extending for at least a half mile to well beyond the Hall of Fame is a beautiful stone wall now home to many trees growing out of the spaces between the blocks. The lighting was fantastic and the current is strong making for very nice paddling. 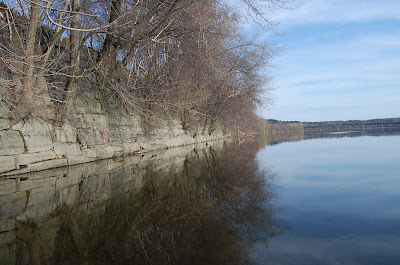 At one point I stopped to take some pictures of an old sewing machine that someone had tossed over the bank. I wonder what it’s history was. 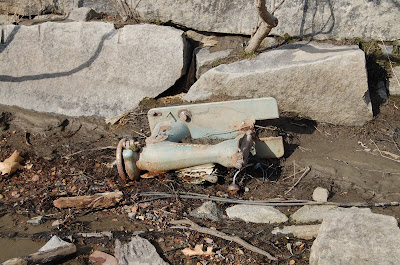 The Mill Brook(?) enters from a tunnel and I shortly passed under the South End Bridge.

There is a really cool tunnel that goes under Rte 91 from Forest Park. I’ve paddled through this into the park but on this trip the water was about a foot to low. It’s really kind of a neat thing to do if the conditions are right. 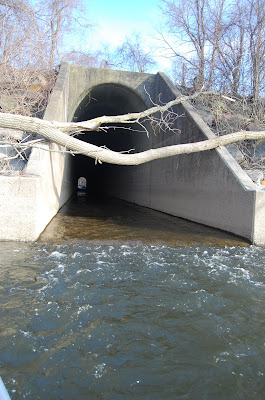 I paddled out into the current and soon arrived at the public park in Longmeadow where my car was waiting for me. I averaged 4.3mph which would have been faster if I had spent less time taking pictures and poking around looking at stuff. Overall a great short trip.
Posted by Chris at 2:12 PM