Patty and I took our now annual anniversary weekend together paddling the Missisquoi River from Enosburg Falls to Swanson, Vt. As is our usual plan we traveled up to the put-in on Friday evening and stayed in a motel so we could get an early start on Saturday morning. I left work early on Friday and the days are long so we got to do some scouting of the river on our way to the motel. 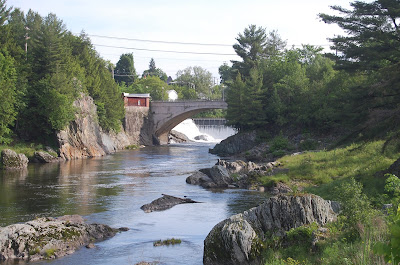 We got a reasonably early start on Saturday morning at the very picturesque put-in below the dam in Enosburg Falls. Around the first bend in the river are a series of easy class II rapids.(at least at this water level, about 1000cfs) This was a fun section of white water requiring some maneuvering around some rocks and a couple of small ledge drops. We scouted once from the shore and Patty stood up in the canoe to get a better look at the less difficult looking sections. We didn’t miss all the rocks but I think we did pretty well especially in a fully loaded canoe.

After this series of rapids there are about 6 miles of flat and quick water. The scenery is very nice along this river with lots of wildflowers and plenty of wildlife. 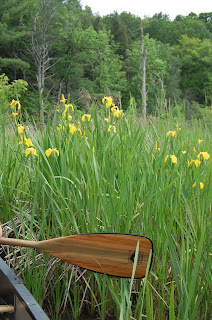 We saw some muskrats and deer as well as osprey, bald eagles, redtail hawks and lots of song birds.

We passed several spots where the banks were sliding down into the river, some of these slides were small and some were big, the largest one I saw must have been 1/2 to ¾ of and acre and it was pretty fresh. I wonder if the happen slowly or quickly enough to cause a small tsunami as the earth displaces the water in the river. I’ve mentioned before that the clay banks of the Missisquoi are some of the slipperiest that I have ever tried to climb. I guess the soil is not very stable.

This section of the Missisquoi has a remote feel to it even though you are never far from a road or houses. The sound of the river blocks out most of the car noises and because you are paddling below the river banks much of the nearby civilization is blocked from view. There is however no escaping the odors that remind you that you are in dairy country.

Soon enough we arrived at the North Sheldon Bridge and the beginning of Abby Rapids, a long series of class I and maybe some class II water. This was a great section, never to hard but still plenty hard enough with constant maneuvering around rocks, lots of fun to read on the fly. We stopped once to scout and take some pictures. Patty is quite good at finding the best way through these sections and we did well although once again we did scratch a bit. 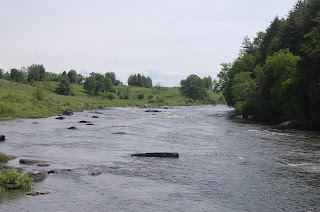 We had to change course quickly at one point and it’s obvious to me that we are getting better as a team in the canoe; this is a good thing because in the future we have to do some sections of the NFCT with more difficult water. 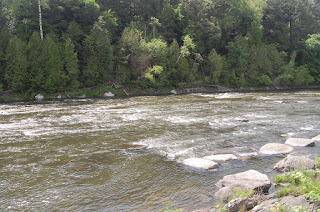 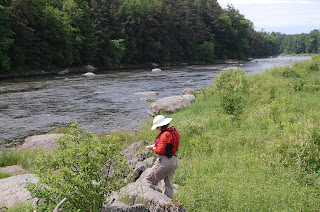 At the end of the Abby rapids as a campsite that we stopped to have a look at. It was a really nice site and I’m sorry that we didn’t get to stay at it. Its under some large white pine and hemlock with a nice view of the river, it’s got a picnic table and lots of fire wood available. Much of the firewood is from a huge dead hemlock that fell sometime last winter. I don’t think anyone would have put up a tent where it fell but if they had been camping there at the time it would have scared ‘em to death. The thunderbox was a bit hard to find. If you visit the site it’s under some pine trees to the left on the other side of the clearing. 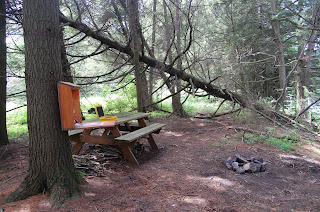 We did some very pleasant paddling and stopped for lunch under the bridge in Sheldon Junction. We had crackers, and cheese, and salami, and an apple. I washed it down with some GatorAide.

Our next obstacle was the portage around the dam at Sheldon Springs. The map says that there are two options one is ½ mile and the other is ¾ mile and wheel-able. We chose the longer option. It turns out to be 1 ½ mile long, and easily wheel-able although hilly. It was much hotter

on the road than it was on the river. Patty and I worked out a good way to tow the canoe. We tied a paddle to the bow line about a foot from the carrying thwart. We each grabbed an end of the paddle and together we could lift the bow and tow the boat easily. We stopped to eat some of the sweet little wild raspberries growing on the side of the road.

At the put-in there was a gentleman fishing who told us that the put-in on the other side was much easier, I wonder if he thought we were going to go all the way back to the start and then ½ mile down the other side so we could enter the river at a beach instead of on the rocks?

After the put-in the NFCT map says there are some rapids that can approach Class III in high water. After having gone through them I’m sure they are right. I think we didn’t take the suggestion seriously enough, although the water was up and the rapids were only class II they were certainly the most difficult we did that day. There was lots of maneuvering involved with a couple of good size drops, one of which kind of snuck up on us. This set of whitewater was right at the upper limit of my comfort zone and caused a little bit of excitement. I think we did a good job of getting through but we easily could have made a wrong decision and dumped. After negotiated them without mishap we were quickly on our way to the East Highgate Ledges.

We followed the well marked new portage though town choosing to be conservative and not run the rapids. The marked take-out is right below a nasty looking little ledge so we took out about 150 feet upstream and lined the drop. 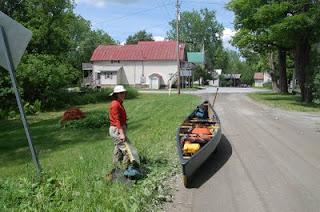 The portage is along a surprisingly busy road. The marked put-in was down a steep bank and was full of limbs and branches so we opted to wheel the boat another ¼ mile down the road to a much easier put-put. We did miss out on a couple of really fun looking ledge drops by bypassing the signed put-in.

The weather started to cloud over as we paddled to our final carry of the day at the Highgate Falls dam. The clouds were not unwelcome as they helped to keep things cooler. The final take-out of the day was at a public boat launch where we met the only other canoe we saw on our trip, a couple of local youth headed out to do some fishing. The portage follows an ATV trail through the woods, over the road, under some power lines and steeply down hill to the campsite. The combination of ATVs, rain, and clay has made the carry treacherous especially on last section. Patty and I were both glad we had the canoe to hold on to a as we went down the last hill.

The campsite is in the woods but we chose to put up our hammocks down by the river where there was a breeze, a view, and a sunset. In the heat of the summer I bet one would choose to camp in the woods where it might be cooler. 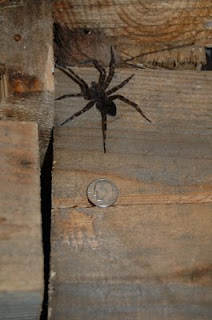 Amazingly the bugs were a non factor but there were a lot of slugs which seemed to get onto everything we put down in the grass. As usual we cooked too much food and had leftovers for the next day. Noodles with sauce, broccoli, carrots, and cheese. Cookies for desert.

We went to bed at about 8:30. After sleeping for a couple of hours I woke up and read a bit. There where some weird animal noises on the other side of the river which I think was a fisher cat, other than that I slept until about 6:00. Coffee and oatmeal for breakfast and we were off on day two. 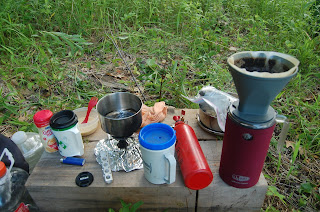 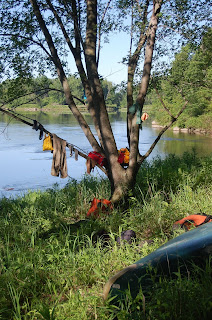 This was a very uneventful and peaceful paddle for about 6 miles to Swanton.
The take-out in Swanton is surprising close to the dam although it’s an easy one. It has a really nice grassy area to organize gear in and there were some beautiful yellow iris on the bank. We carried our gear a couple hundred yards to the river front park and had a snack while waiting for the cab to shuttle one of us back to get the car. Patty volunteered so I took about an hour nap under the cottonwoods. The “cotton” was blowing out of the trees and it was almost like a warm snowstorm. I wish we had had time to paddle further and gotten to Lake Champlain although it would have been into an increasing headwind. 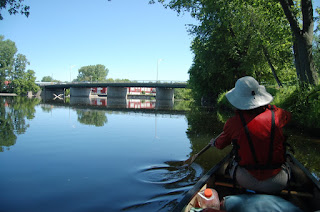