I’ve been waiting all summer to get a good window of weather so I could do the Plattsburgh to Swanton section of the NFCT. Finally no important obligations and a weather report of warm temperatures, sunny weather, and mild winds saw me leaving for Plattsburgh on Friday night.
The plan was to paddle about 23 miles to North Hero Island the first day and then about 12 miles to Swanton on the second. I reserved a campsite at Cumberland Bay State Park and arranged for a shuttle to meet me in Swanton on Sunday. Carl and Shelly at the Swanton Motel are trying to increase business so they are offering a shuttle service for people canoeing locally. The shuttle issue has always been one of the most difficult things for me deal with on these trips and it’s good to have an resource in Swanton. 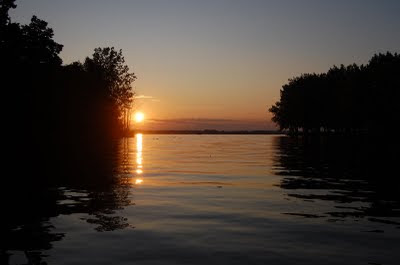 The state park was quieter than I expected so I had a good nights sleep until my alarm went on at 5:15. I quickly packed up my stuff and was at the public launch on the Saranac River and on the water right about 6:00, just as the sun was rising over Cumberland Head. The water seemed calm as I paddled east directly across the bay.

After about 2/3 of a mile the water started to get choppy and the wind picked up out of the south causing the water to get quite rough. The first part of the crossing is protected buy a breakwater that I hadn’t notice before, I decided to go straight for Cumberland Head Light figuring that the worst thing that could happen was that I would dump and I’d have to hold on to the boat until the wind pushed me to land in about a mile and a half. The water grew steadily rougher, enough to make me slightly nervous but I felt stable enough in a kneeling position that I didn’t think I would tip. I don't think it would have been an issue at all if I hadn't been alone.

At Cumberland Head the wind hadn’t gotten any worse so I decided to go ahead and make the mile and a half crossing over to South Hero Island. By now it was about 7:00 and the sun was up and I could see where I was going and what I was aiming for. I also had much better depth perception in the full light of day. In low light conditions it’s hard to tell where the closest land is, of course if you look at the map you can tell. 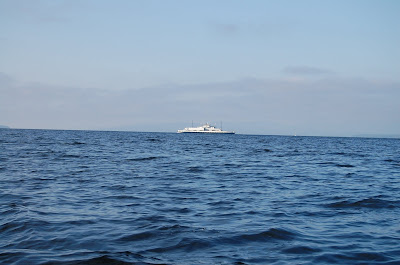 I watched the ferries travel back and forth and in about half on hour I was near enough to the shore to turn north and look for a place to land for a late breakfast. Once I got near the shore I was protected from the southeast wind, the paddling was easier, and took a lot less concentration. I stopped at the public boat access about a 2.5 miles north of the ferry dock at Gordon Landing. I used the outhouse and had some fruit and water on the lawn. 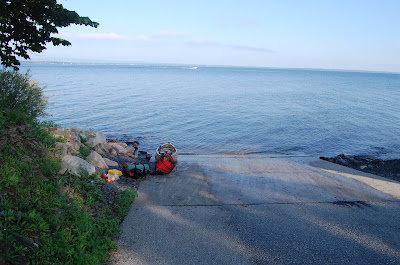 I passed several Vermont public boat access points on this trip and they were all very clean with no litter, have a clean and well stocked outhouse, and pleasant place to sit and rest. This was nice because nearly all of the rest of the the shoreline is private property.

The next landmark was Nichols Point and the entrance to The Gut. Here I found many nice big expensive sailboats moored. It was quite pretty. At least half were from Canada, I asked if it was a usual thing and was told that on nice weekends it's common to see lots of sailboats anchored overnight in the protected area. 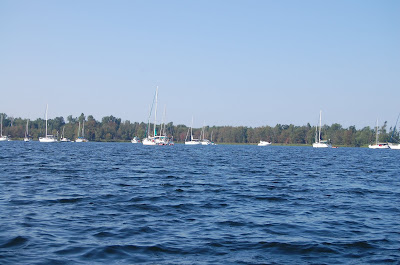 I passed through The Gut to the east side of the island into the Inland Sea and returned to the wind. The waves from the wind and the chop from the motor boats made the paddling difficult again but I made steady progress toward North Hero. Because I was close to shore there was no real danger but the rough water made going in a straight line difficult and I was constantly having to correct my course and pay attention the water. When I got to City Bay I stopped on a beach and had some food and water and took a nap in the shade. I was making good time and wasn’t worried about getting to the campground.

After I woke up I was got ready to fight the wind and waves for several hours on my way up to North Hero State Park. I was on the east side of the Island because that'swhere the NFCT map said to go. A careful reading of the trail description said it was possible to portage over or go under Rte.2 about a mile north of where I was. This would lead to more protected waters so I set out looking for the carry. 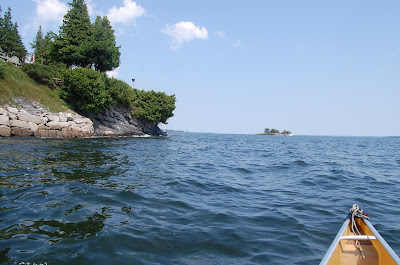 Rte 2 is obvious but the culvert was hidden, when I eventually found it there was just barely enough room for me to squeeze through. It was a little unnerving to hear and feel the cars go overhead especially because of a noticeable low point in the middle of the tunnel. 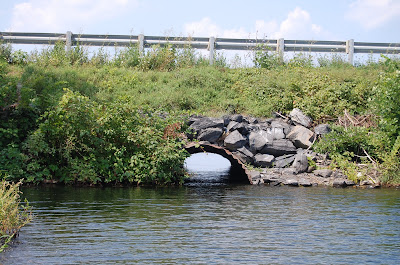 The paddling through Carry Bay was nice, now that I was out of the wind the heat was more of an issue so I made sure to drink plenty of water and I dipped my hat in the lake often to keep it wet. I rounded Blockhouse point and headed up the Alburg Passage toward the Rte 2 bridge. 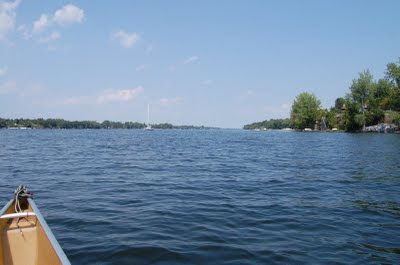 If you read the Trail Updates on the NFCT website and look at the map carefully it’s not too hard to find the landing and trail to the campground. There’s a Lake Champlain Paddlers’ Trial sign at the spot. Since it was early I paddled up to the public beach and did some reading at a picnic table. I would have done this at the campsite but even at mid afternoon the mosquitoes were terrible. At about 4:30 I headed back to set up camp and cook dinner. After eating I walked the ¾ of a mile to the caretakers office to register for the night. The campground is only open to Paddlers and Bicyclers, I was the only one there. 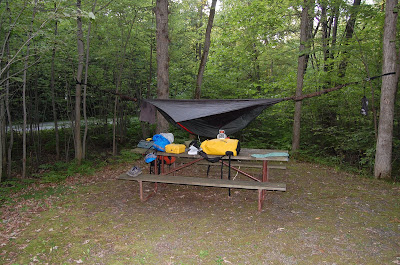 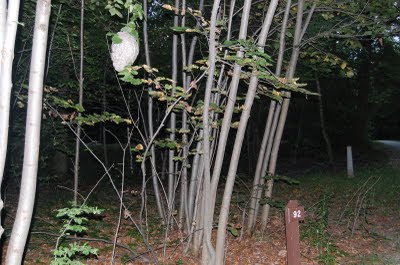 The mile and a half walk felt good after paddling all day and I got to take a look around a bit. There is a large wasp nest in site 92 but it isn’t doing anyone any harm. The whole site looks like it was built in a swamp using fill for the roads and campsites. This explains the vast quantities of mosquitoes. I cleaned up and went to bed early and had an excellent nights sleep, there is a resident Barred owl that woke me up a couple of times but I love to hear them call.

I woke up shortly after 4:00 to go to the bathroom. I tried to get back to sleep but decided to get moving. I was on the water at 5:00 and the sun was just starting to lighten the sky as I left Stony Point and crossed north east to Clark Point, unfortunately the wind was also starting to pick up. I was surprised at the strength the wind but the crossing was only a hair over mile so I reached relative safety in less that a half hour. I followed the shoreline to the northwest and soon I was protected from the wind. I passed under the railroad trestle and then the new Rte 78 bridge and headed towards the mouth of the Missisquoi River just south of the border with Canada. 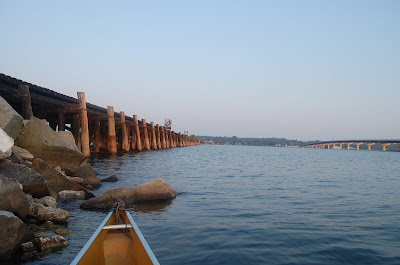 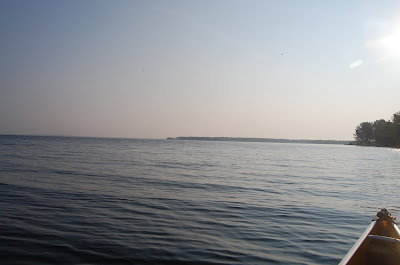 Since it was still early I decided to take the trip to the heron rookery and do a little exploring and in the NWR. 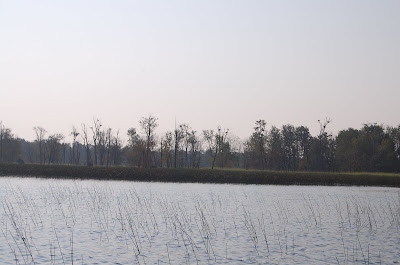 I saw several types of ducks, some osprey, some herons, and lots of wildflowers. Purple Loosestrife is an unwanted invasive plant but is sure is pretty, the Arrowhead was also blooming . I was surprised at how colorful the Swamp maple was. I think we're going to have a great foliage season this year. the last 4 miles whereinto a stiff breeze and I reached the take- out at Louie’s Landing right before 10:00 and called for the shuttle. 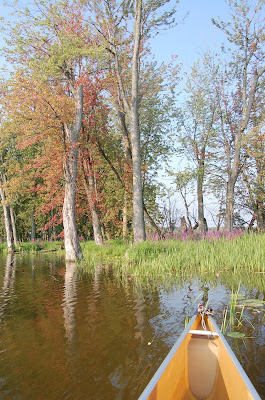 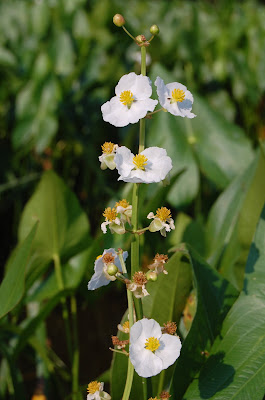