The long day trip to Lake Memphremagog was to complete another fragment that I needed to do in order to reach my goal of section paddling the NFCT. My only realistic choice was to paddle from Newport, VT to Perkins Landing in Canada and back, about 24 miles. I got to see the trail from both directions on this trip. I was up at 5:30 and on the road by 6:00, I arrived in Newport at about 9:30 and was on the water by 10:00.

This isn’t my favorite type of paddling because it involves long monotonous stretches of shoreline without any surprises or changes of scenery. On the plus side the weather couldn’t have been much better. I suppose I could have had a tail wind both ways but that’s asking a bit much. The wind was out of the southeast as I started, just strong enough to be a help and not so strong as to cause a problem. 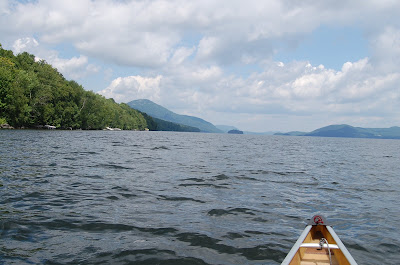 The first 5.5 miles went by uneventfully and I soon reached the Canadian Custom station at Leadville Wharf. I used the phone-on-an-arm and called Canadian Customs and spoke to a nice woman who asked some questions, gave me a number and sent me on my way. I’m sure she was watching me on the little camera attached to the abandoned customs house. This is another great example of one of the quirky little things that you have to deal with on the trail. 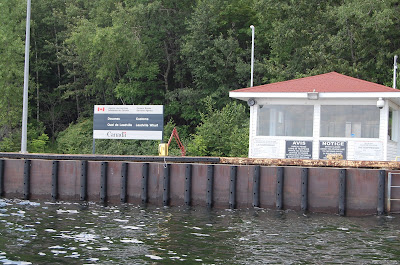 The shoreline becomes much steeper at the border and the number of houses decreases. For a while there were some modest lake homes, as I got closer to Owl’s Head Mountain there were some huge houses that reminded me of Lake Tahoe. One of them had some impressive topiary between it and the water.

There are some pretty obvious landmarks as you head north that I used as goals as I paddled. It seemed to break up the trip a bit. The boat traffic increased steadily as I progressed towards Perkins Landing. There were lots of fishing boats anchored at the narrowest and deepest part of the lake near Owl’s Head. Between there and the turn around point the water was very choppy from the heavy boat traffic. It was difficult to paddle in a straight line with the waves coming form all different directions. I hate jet skis. 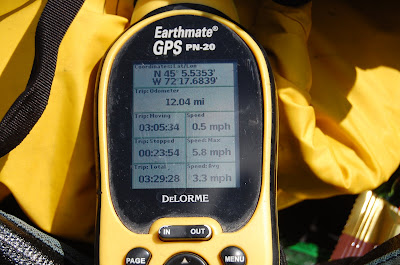 Perkins Landing was very busy probably due to the rare sunny weather we were having. It was overflowing with cars and trailers as well as people waiting in line to get in or out of the water but everyone seemed happy to wait their turn. There is a nice little beach that was being enjoyed by several families. I landed and used the restrooms, took some pictures, ate a light snack and started on my return trip. 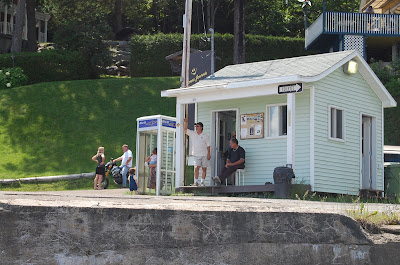 I always keep 2 or 3 PowerBars in my thwart bag just in case I need something to eat in an emergency. Since I forgot to bring the food I left on the kitchen counter it was a good thing I had them. I also keep a few single serving of powdered GatorAide for the same reason. Now have to remember to replace them.

The wind had shifted and was now from the southwest so by staying close to shore I had no issues with wind. The chop from the boats was worse on the way back. The trip north took me just over three hours of paddling with ½ hour of stopped time. I was figuring on about 4 hours for the trip back.

The return trip was pretty much the slog I expected it to be. The scenery was nice I enjoyed watching the Sailboats that were on the other side of the lake where the wind was better. 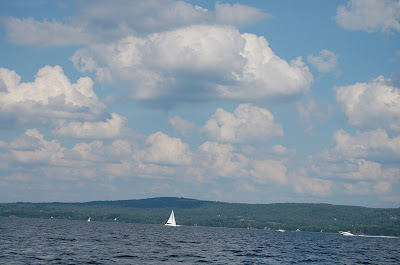 I have some feelings about what is appropriate lakeside development and what is inappropriate and I took a picture that I think sums it up. I prefer lakes with no development but I understand that people are going to want to have lakeside houses. I strongly prefer modest buildings that at least make an effort to blend in with the surroundings. I have seen lots of buildings, even large ones, that are set back a little bit, have some landscaping between them and the lake and in general are pleasing to the eye. Others are really ugly. I don’t understand why some people have to be in your face so much. 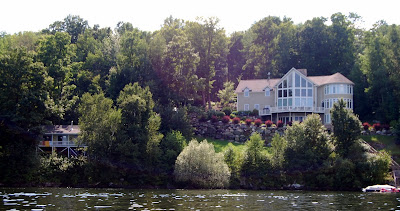 The last three miles into Newport seemed to take forever, part of this was that I lost much of my protection from the wind, my sunburn was starting to bother me, and I was getting sore and tired. I landed at 5:00 and was home by 9:30. I think this trip was good training for Lake Champlain. 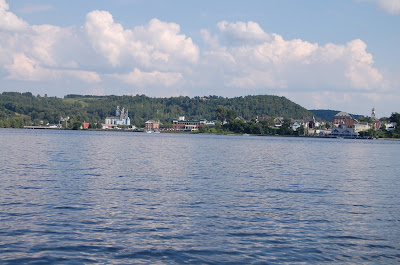