6/20/09 The weather in our area has been crud for several days and the forecast looked miserable through the weekend and into the middle of next week so after studying the internet I decided that early Saturday morning was my best window for a dry paddle. I got up early and was out of the house and on the road by 6:00 am for the 1.5 hour drive west to the put-in. 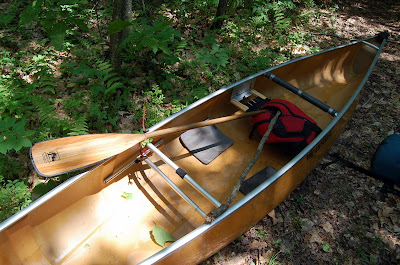 This is the only trip that I repeat on a regular basis. The only way to get to East Indies Pond is to first paddle about half a mile over Thousand Acre Swamp then carry about 1/3 of a mile on an old abandoned road to get to Mill pond. After paddling about 100 yards on Mill Pond there is a lift over at a beaver dam to get to East Indies Pond. There’s enough work involved to keep away all but the most adventuresome local paddlers. 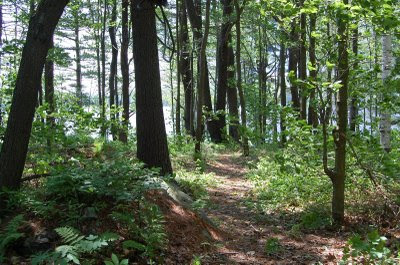 The nearest road is more than a mile away, there must be a way to hike to the pond but I don’t know where it is. I have on occasion heard and seen ATV activity and I’m sure the occasional snow mobile get to the pond but as far as Massachusetts is concerned this is as remote as it gets.

The reward for the effort is fantastic. The fishing is wonderful, the wildflowers are spectacular, the birding is great, and the fall foliage is first rate. I’ve done this trip many times and the portage trail is getting worse which is fine by me. The blow downs aren’t that hard to go around or over and they help keep ATVs and kayakers away. 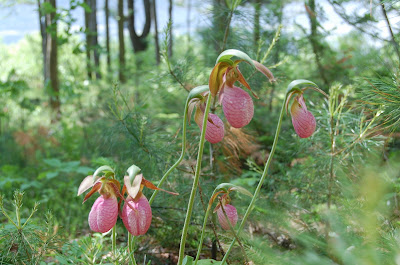 Each time I do this trip I find something new and special to see, this time was no exception. Thousand Acre Swamp seemed to be about a foot higher than normal. We’ve had lots of rain and I figured maybe the beavers had been active or debris was clogging the outlet at the dam. The water levels fluctuate so I didn’t give it much thought. At the end of the portage there is small stream to cross that, depending on the season, can get your feet wet. This time it was very high and I got wet up to my shins. Once again I figured the water was high from all the rain. As soon as I got to the end of the portage I knew something was amiss. There was very little water in Mill Pond and a brief investigation revealed that the ancient dam had somehow let go. 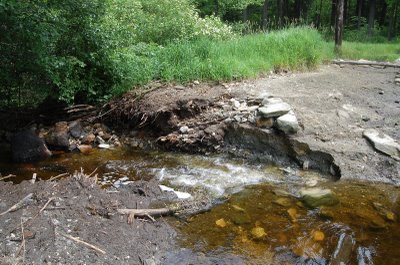 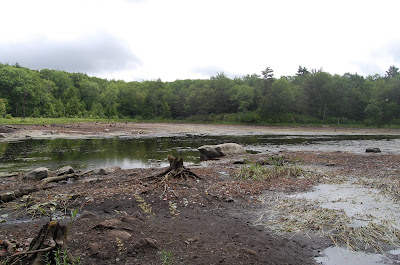 The whole pond, maybe an acre and a half was mostly drained and was still draining. The water level was down maybe 4ft leaving the resident beaver lodge high, dry, and exposed. 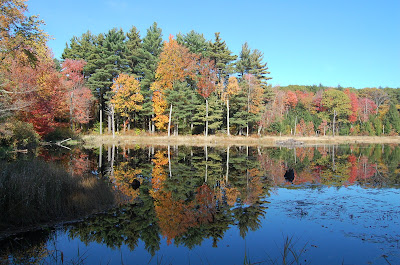 I've included a picture from last fall for a reference. 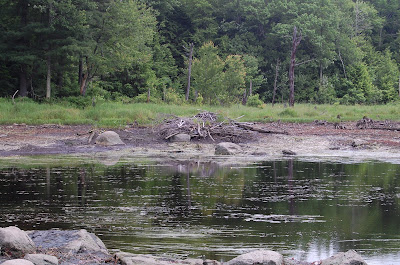 I decided to do more investigation on my return and I headed off to find an alternative way to get to East Indies Pond. For a brief moment I considered going via the shore but the mud was deep and thick where the water once was and the banks were an impenetrable chaos of laurel, hemlock, and other plants.

I carried back out to the old road and headed south for a few hundred yards and then bushwhacked into the woods eventually fighting my way to the shore. I’m sure you can imagine trying to get through thick Hemlock and Mountain Laurel with a 15ft canoe and 25 pound backpack on. Fortunately the bugs weren’t too bad. I managed to put-in just below the overgrown beaver dam so it took me a minute to find a place where I could get out and not be in thigh deep water. Eventually I got the canoe over the dam with out impaling myself on any of the pointed sticks the beavers leave as booby traps for canoers like me. When ever you see a picture of a beaver dam it’s always a beautifully engineered object that any human with some degree of coordination could easily walk along the top of. In real life this isn’t the case. First, they’re made up of mud, rock, and some of the most evil looking pointed stick you can imagine. Many of the sticks are pointed up and are a serious danger if you were to fall on them.

This dam has been around long enough to be overgrown with bushes and plants that make climbing over it much more difficult that you would think. The upstream side is deep enough that you don’t want to fall in and the downstream side is deeper than you want and the bottom is muddy. I’m willing to get as wet as needed but I also know that the muddy areas around these beaver dams are prime locations for leeches so I was not particularly anxious to spend any more time in the water than I needed to. I eventually got over the dam and into East Indies Pond where the paddling was easy.

I go here every year because the mountain Laurel Bloom is usually spectacular. This year the Mountain Laurels were only fair but there were lots of other wildflowers that were fantastic. The Blue Flags were great, I don’t think I’ve ever seen so many and such large groups of these irises as I have this year. 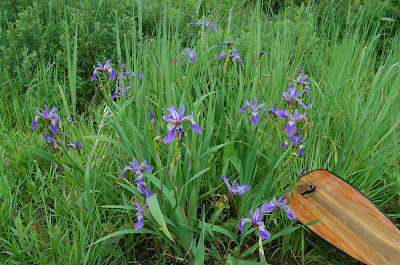 The same is true for the Lady Slippers earlier in the year.


I paddled along the shore doing a little fishing. After catching 3 Pickerel and a Sunfish I put the rod away so I could do a little more exploring along the banks. There is great little campsite on the north shore that I got out and looked at. It has been used sometime this spring because the fire pit was used and there were some half burned beer cans in it. They also left a couple of old lawn chairs. Other than that the site was in good shape. I spent the night there once and probably will again sometime.

As I mentioned earlier the blue flag were impressive and I took lots of pictures trying to get the perfect shot. While I was paddling by a beaver lodge an obviously agitated female red wing blackbird flew out of a hummock of grass. The hummock was surrounded by water and not much bigger than a basketball and sure en 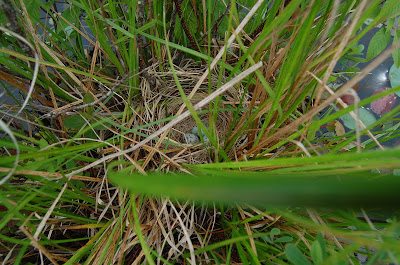 ough right in the middle of it was the nest with three eggs. I took some pictures and moved on so as not to aggravate the mother any more than I already had.

Nearby in the boggy south end of the lake is some sheeps-laural which I wanted to get a picture of. It’s a beautiful miniature laurel found in this habitat. It’s also called lambs kill because it’s poisonous, I didn’t eat any. 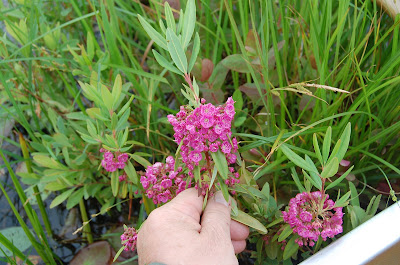 I also came across a wildflower that I wasn’t able to identify in any of my books or on the internet. If any of the 2 or 3 people who ever read this can identify it please let me know. 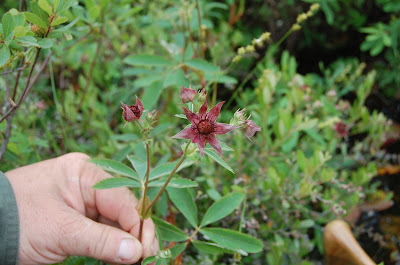 I did a bit more poking around by the shore and then headed to a small clearing on the east shore. I recalled from reading a guide book that there was an alternative carry here that should bring me back to the old road that I portaged in on. The trail headed up hill and trended in the wrong direction but eventually met up with the old road which I followed back north towards Mill Pond passing some impressive glacial erratics along the way. I went back to take photos of the dam collapse and the emptied pond and then finished the carry back to Thousand Acre Swamp. I’m sure that the failure of the dam and subsequent draining of the pond is what raised the water level in Thousand Acre Swamp. Many of the pond plants were under water so the rise in water level must have been fast. I’m looking forward to coming back later in the year to see how things have changes. I think I’ll come back later in the summer and then in the fall.
Posted by Chris at 2:06 PM

Hi Chris,
You've got some great posts here! I came across your name as I was looking at the Northern Forest Canoe Trail website. Looks like you're something of a new england waterway guru.
A friend and I are planning a week-long trip next week. We're manning an inflatable raft and bringing a tent. I was wondering if you might know of a good place to put in and take out? We were thinking of going down the CT river, but it seems like part of the NFCT might be the way to go... Any thoughts?
Thanks so much!(( great photos!))
jenn

I'm many years late, but that last flower is marsh-cinquefoil

I came across your site while looking for info on East Indies Pond. Thank you!