I set my alarm for 3:45am and had everything packed and ready to go. I drove the ¾ mile to the put-in below the dam in Swanton, carried my gear to the water and was paddling by 4:30. Even at this early hour, the sun wasn’t up and the sky was only beginning to lighten, I could hear the wind in the trees. This wasn’t a good sign but “hope spring eternal” and I kept on paddling.

I had planned this weekend for a while. Patty and the kids would be my “support team”, while I paddled they would find a beach to swim at and a Campsite for Saturday night. Occasionally they would see if they could spot me out on the lake. Unfortunately the weather forecast turned bad but since we already had a motel reservation I decided to get an early start and see if I could get at least some of the trip done.

I’m intimidated by big lakes and Lake Champlain qualifies as a big lake. The Northern Forest Canoe Trail enters at Plattsburgh, NY and exits via the Missisquoi River right near the US Canada border. I chose to paddle north to south mainly because I couldn’t get a motel room in Plattsburgh, something about a fishing tournament. There are several places where you have to cross open water, although none are more than about a mile and a half they do leave you exposed to the wind and away from the relative safety of the shore. 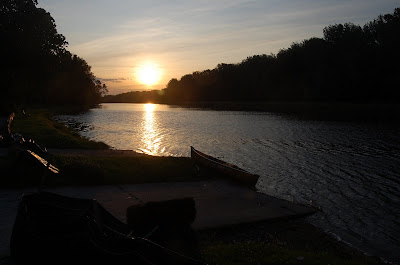 Steady paddling with the current and growing wind from the south had me making good time as the sun slowly rose in the east and the light began to reveal the details to the riversides. I soon passed the boundary of the Missisquoi Nat’l Wildlife Refuge and then Louie’s Landing boat launch. With the sun up and the wind from my back I did some sailing for a mile or two before the river began slowly bending to the west and I had to paddle again.

There were lots and lots of birds around. I lost count of the great blue herons that I saw. I also observed several osprey, king fishers, gulls, swallows and I heard lots of warblers and other songbirds. As you gradually make your way into the delta you can see through the trees into the marshy areas on either side of you. The woods are very pretty with lots of ferns covering the forest floor and silver maples providing shade. 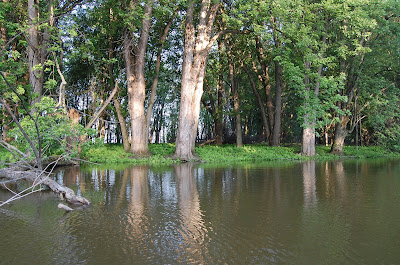 The wind was steadily increasing as I paddled the 8 miles to the entrance to Lake Champlain. I pretty much knew what I was going to see and I wasn’t wrong. The winds were howling directly out of the south. The pictures I have don’t really do it justice. The wind was probably a steady 20 to 25mph with higher gusts. There were lots of whitecaps and the water seemed to be rolling toward me. I paddled out a short ways and tried to anchor the canoe in some reed so I could take some pictures but the wind was to strong. The only decision to make was to head back up river to Louie’s landing and call for a pick up. It would have been foolish and dangerous to try and continue south. 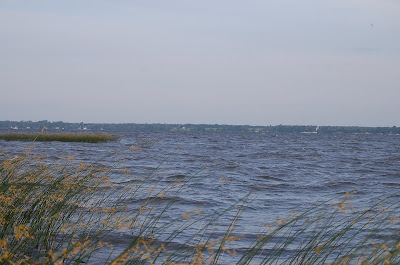 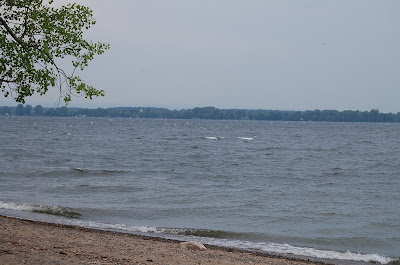 When we paddled a different sedction of the Missisquoi last summer we passed a very grassy section on bank and on two or three occasions some type of animal slid into the water just behind our canoe. I never saw the animal but I assumed they were muskrats. The noise sounded like someone dropping a bowling ball into the river. On my way up river the same thing happend only this time I saw the animal and it was a smallish beaver, the tail was obvious, it dropped into the water right as I passed it. The must either be eating or resting in the tall grass. 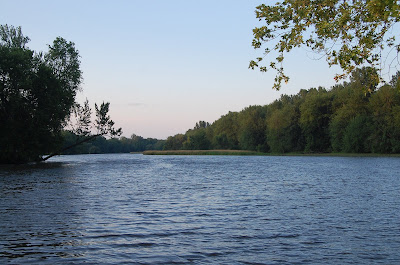 I made it back to the landing by 8:00am and woke up Patty with a call to come and get me. I told her that there was no rush as I was lying on the grass and planning on taking a nap. She arrived an hour and a half later. I’m looking forward to trying this section again. On the plus side we had a great time sightseeing with the kids on the Hero Islands. 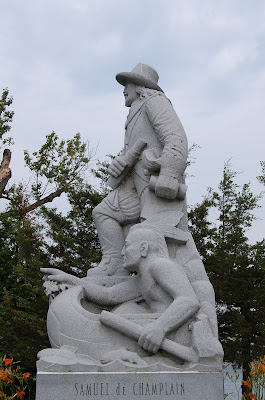 2009 is the 400th anniversary of Samuel Champlain "discovering" the lake although he found it with the help of a local guide.
Posted by Chris at 2:15 PM