NFCT Jackman to Rockwood, ME

We left Carrabasett Valley at a reasonable hour and drove the circuitous route to Jackman arriving at about noon. Out first stop was at the local grocery store where I purchased some last minute lunch items while listening to Nancy Sinatra sing “These Boots Were Made for Walking” on the stores sound system. It was a bit surreal but the folks were all very nice. 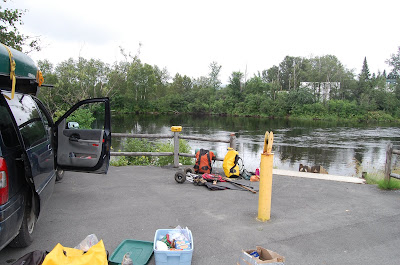 I put-in at the Rte 201 Bridge over the Moose River. It took a few minutes to get all my gear ready and to do the last minute idiot checks to make sure I didn’t forget anything. I was soon off and paddling, after the first mile there are only a few camps along the river and it was a peaceful ride. The wild flowers were excellent and I saw several great examples of Canada Lily. 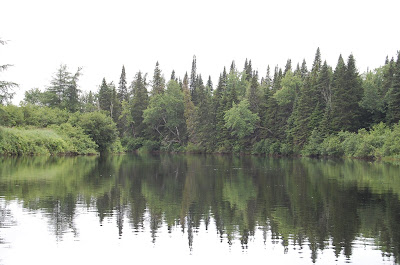 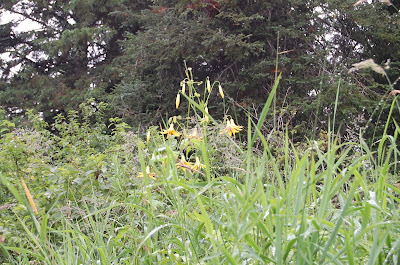 It’s about 7 miles to the west end of Long Lake, the drizzle and hopes of seeing a moose kept me going at a steady pace. Near the entrance to the lake the river opens up a bit and I got to see my first moose of the trip, a large cow who looked a bit bothered that I was on her river. She slowly climbed the bank and headed to the woods. Since it was alternating rain and heavy mist I didn’t have my camera ready to get a picture. 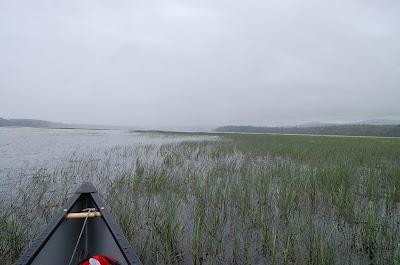 As the trees transitioned to wetlands I realized that I had been sheltered from the wind and that the trip down the lake wasn’t going to be as easy as I hoped. The wind was out of the northwest and made the paddling strenuous as it pushed the canoe around. I made good progress mostly because I was alone and needed to continue paddling in order to keep the canoe going in the correct direction. Long Lake was very nice, it has camps sprinkled along the shore but it’s certainly not over developed. I was 1/2 way to the eastern end before I saw two kayakers near the Lower Narrows. They were the only two boats I saw on the 7 mile long lake. I didn’t see any of the marked campsites but I really didn’t look too hard. 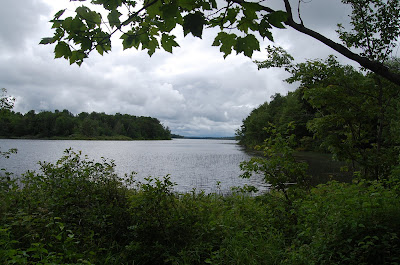 I got a little confused entering the Moose River again as there are some islands not shown on the map. The easiest way to find the outlet is to look for The current bending grass on the bottom of the lake. The 2 miles of river were great. 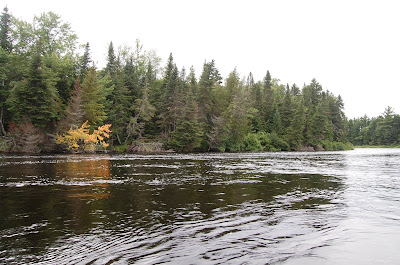 It was nice to be out of the wind again, the scenery was fantastic, and the white water was either easy or just challenging enough without being scary. I got to see my second moose and if there had been more time I would've liked to have done some fishing because the trout were rising. 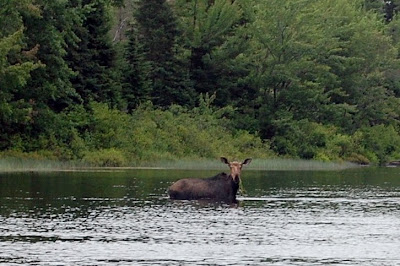 The landing at the Demo Road Bridge was a little difficult because there’s a strainer at the take out which sort of forces you to head into the current, additionally the water was high due to all the rain. I wouldn't have wanted to get sucked into the drop below the bridge. 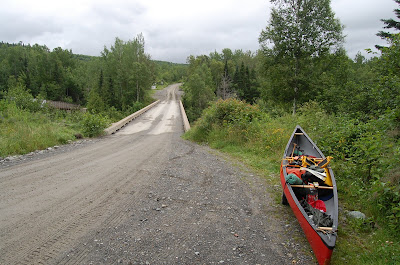 I got all my gear up to the road and organized in the canoe and began the three mile Demo Portage. At least the rain had stopped. The NFCT map is incorrect and the description is misleading. The first fork is at .5 miles and then you go an ADDITIONAL 1.5 miles to the turn-off on the one lane track in the description. 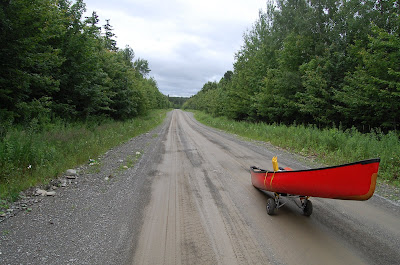 The turn is AFTER the Demo Brook at the top of rise and at the beginning of a gentle turn to the north. The turn-off was well marked. 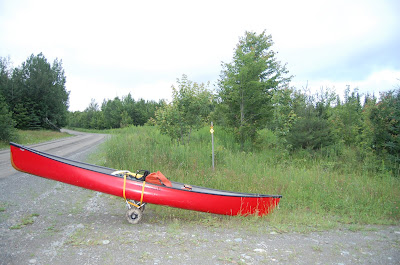 I then headed down the single lane overgrown dirt road, at one point I had to wade through knee deep water and the cart flipped. After getting everything back together I began looking for a good camping spot. 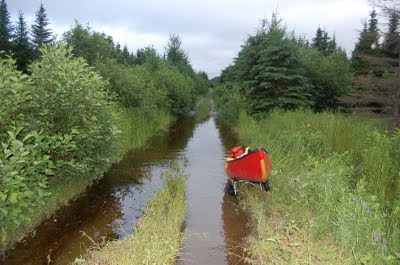 It was late and I was tired and it had begun to rain again. I'm glad I did the portage on a cool cloudy evening rather than during a hot sunny day. I got the hammock set up and dinner cooked and I went to bed. About a 19 mile day with a 1:00pm start.

It poured rain during the night but stopped by the morning. I got the gear packed up and decided to wait until I got to the water to eat because the mosquitoes were horrible. After a short walk on the road I got to the final .25 mile section through the woods. Once again the turn was well marked, it’s on the right. I had to carry the boat for the final section which probably isn’t .25 mile and is relatively easy. Judging from the footprints on the trail it is very popular with the local moose. I didn’t see any human tracks. 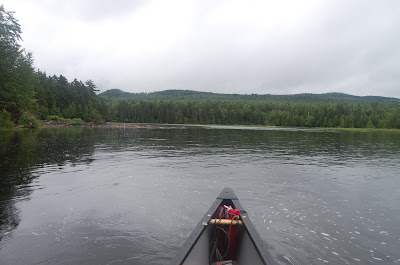 The put in was small but nice and the campsite at the opening to Brassua Lake looked excellent. I wish I hadn’t run out of daylight the previous night and had made it that far.

The wind was quite strong on the lake and I had to hug the south shore to keep out of the worst of it. 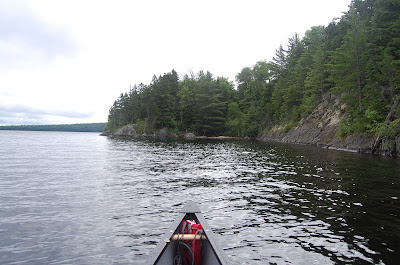 As I headed around the final point I was headed straight south into the wind and had a hard time fighting the waves, I estimate the winds at 20 to 25 mph. I was averaging about 1.5 mph on this section. I could see the dam I needed to get to 1.25 miles away across open water but there was no way I was going to be able to do the crossing so I stayed near the shore and went the long way around probably about 5.5 miles. In calm waters the trip across Brassua Lake is about 7 miles, I estimate I paddled about 12 or 13 doing my best to avoid the wind and waves and taking the safest route. Sometimes solo paddling comes down to plain old hard work and conservative decision making. 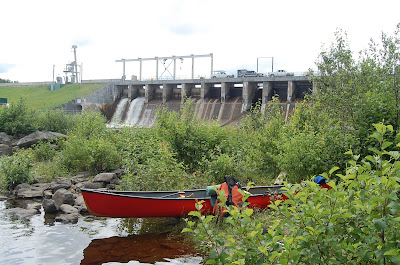 I eventually got to the dam about when the sky cleared and the sun came out. An easy carry led to the river below the dam. I guess there was a front passing through because the air dried out and the wind died down as well. I took a brief 15 minute snack & nap on the grass by the dam. My wife had been tracking me on my SPOT messenger. She would call my father in law who would look on his computer and then relay my position to Patty. Unknown to me she was on the other side of the dam at one point but couldn’t get to the side I was on.

A couple of easy rapid lead to the heavily developed river at the entrance to Moosehead Lake. Mount Kineo is an impressive landmark to head for. 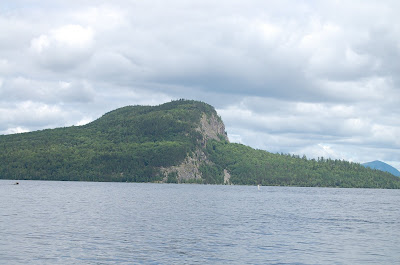 I eventually met up with the family at out predetermined meeting point at the bridge over the river. We went downstream and had a snack and made plans. While I paddled the last few miles to Rockwood Patty and the kids took the boat shuttle over to Kineo and hiked to the top. I organized the gear, put it into the car and took another nap. The people-watching was pretty good at the boat launch. I can’t wait to go up to the area and do some more paddling. 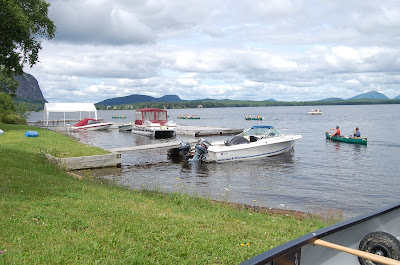 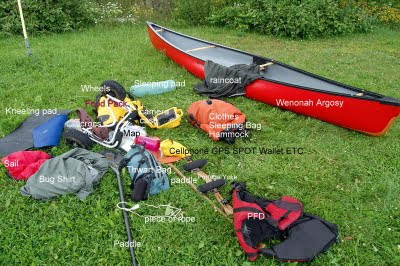