Over the Columbus Day weekend I took my last NFCT trip for the season and headed up North to Dead River Township to paddle the Dead River from below Long Falls Dam to Spencer Stream. Until reading about this trip at Trash Paddlers site http://www.trashpaddler.com/2010/09/nfct-stratton-me-to-grand-falls-return.html
I didn’t know it was possible to do this section as a down and back trip.

After a nice stay at my sister’s house outside Lewiston I drove the remaining two plus hours to the put in at Big Eddy. It was cool and windy Sunday morning as I headed out, I passed a couple of late season fishermen who looked cold standing in the water.
The first ½ mile goes through some easy rapids and soon passes an alternative put-in at Spring Lake Landing. It’s possible to avoid the rapids by putting in here, this could be advisable in high water, during a dam release, or if you don’t want to line or pole back up the rapids to Big Eddy. 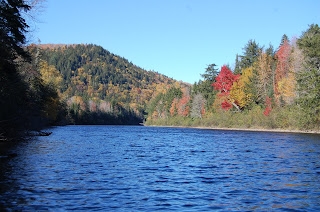 The paddling is very pleasant along the tree lined banks with occasional views of the surrounding mountains. This section of the trail heads generally northwest which means you’re paddling into the prevailing wind. By hugging the shore I was usually able to avoid the worst of the wind but occasionally I had to fight pretty hard to keep the boat going straight into some pretty strong gusts. At about half way to the carry around Grand Falls I passed Half Way Brook. This is a very pleasing looking brook so I followed it up stream for awhile until I came to a beaver dam. There are great views of the Bigelow Range in the distance. 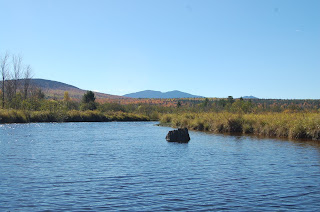 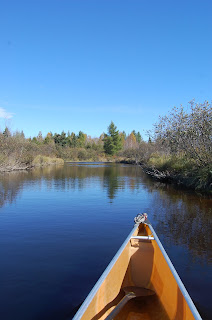 From Halfway Brook to the take-out the river begins to meander a bit so the wind can come at you from any direction. The scenery gets better especially at this time of year as you get views of the foliage on the surrounding hills. 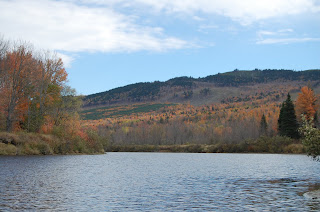 Five or six miles from the put-in you come to the NFCT carry on river left, it’s reasonably obvious and well marked to the left of the island in mid river. On river right, hidden just around the bend where the right hand channel goes around the island, is the dock and take-out for the Maine Huts and Trails trail. They told me there would be a canoe rack here but they haven’t built it yet.

I got the boat out of the water, up into the woods, and stored my paddles and PFD underneath the overturned canoe. I packed up my gear and headed along river right on the new Maine Huts and Trails trail which soon leads to the Tom & Kate Chapell Footbridge bridge across the river. 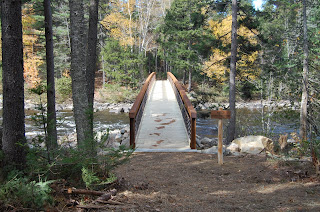 The bridge is located just down stream of the old dam shown on the NFCT map. The trail follows the left shore to an outlook with beautiful views of the falls. 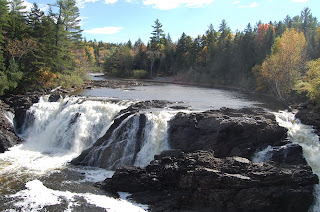 After some pictures I continued on down some beautiful new stone stairs and was soon on the dirt road that follows the river up to the gated bridge over Spencer Stream. 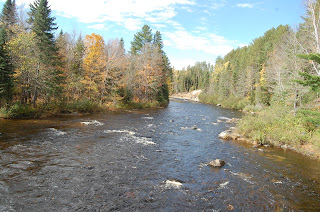 A right turn after the bridge leads to the rafter put-in where the trail continues down river for about ¾ of a mile. This is fantastic walking, next time I come I plan on bringing my rod so I can do some fishing, and there are also a couple of nice beaches for swimming. About a quarter mile from the hut the trail heads uphill on an old skidder road. I soon arrived at the new Grand Falls Hut. 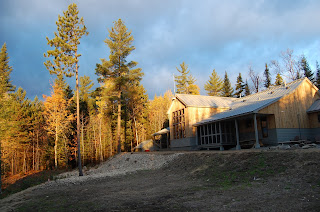 This was the first night the hut was open to the public, the previous night it was only open to invited guests and VIPs for the grand opening. I checked in with the staff and went to my room to do a little reading and take a short nap. Sometime during my siesta one of the other guests took some pictures of a big bull moose just behind the bunk house. Dinner was great and so was the conversation with the other guests. The hut was half full with 16 out of 32 beds taken. 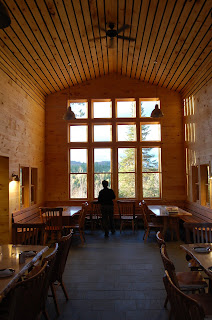 The sunrise on Monday morning was excellent as was a breakfast of scrambled eggs and sausage with hot coffee and juice. After cleaning my room and packing I headed back to my canoe. 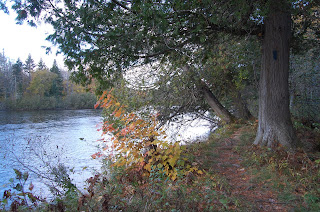 My GPS says its 2.1 miles from the hut to the take-out. It’s mostly flat with a couple of short hills, one at the hut and another at the falls. 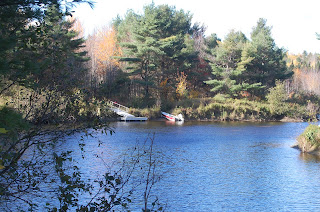 The return paddle was wonderful, both the sun and wind were at my back. The sun lit the foliage beautifully and the wind made the paddling quick and easy. 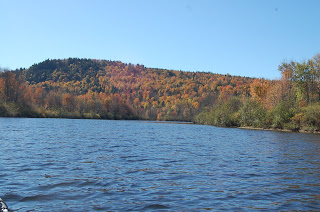 There was enough wind to form whitecaps on the river in the final stretch up to the rapids. A fellow camper was at the Spring Lake Landing take-out and I accepted a ride to my car rather that working my way up the rapids back to Big Eddy.
Posted by Chris at 4:23 PM

love your blog, had to link up!