At about 7:00am I looked at Patty who said “I’m not going anywhere until the rain stops”. I’m not sure if it was raining or whether the water was dripping heavily off the trees but we got up about an hour later and began our day. We ate, got everything packed up and organized into efficient loads, put on our wet clothes from the day before, and all headed out with a load, no need to get another set of clothes wet. We each carried a pack including Sally who was determined to contribute her fair share.

We were back at the east end in about 45 minutes and with only 2 loads left we dicided that the girls would stay, get the boats in the water, and boil some water for a mid morning cup of soup. Brad and I returned for the last two packs. We were back in an hour and a half, got everything into the canoes and set off across Mud Pond after first post-holing through knee deep mire getting to water deep enough to paddle. The sun came out right about now.

Soon we were at the opposite shore and it was immediately and painfully obvious we could not float down Mud Brook and would have to portage over to Chamberlain Lake. We double carried this one but it was difficult and Patty and I were very tired. The trail is quite rough and you need to concentrate to avoid any mistakes. The water in Chamberlain was low so the portage was .45 mile long. With higher water you would be able to shorten the carry significantly and in high water you can float the brook. 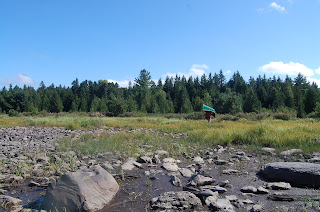 A ¾ mile paddle leads to a nice campsite but Brad insisted we do another ¾ miles to cross over to Gravel Beach in case the wind picked up over night. 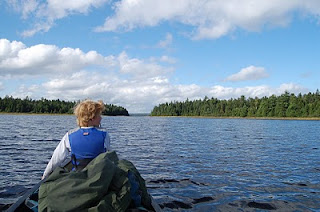 This turned out to be a wise decision on his part and I’m glad he convinced us to do it. It would have been easy to stop early and we would have paid for it the following morning. Gravel Beach was very nice and we set up a clothes line, swam to get clean, admired the brand new outhouse and generally relaxed in the sunlight with dry clothes on. 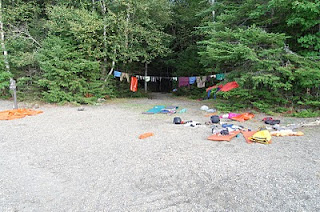 The next morning it was cloudy again with a strong wind out of the north, thankfully we would have a tail wind for the day. We cooked our final meal and headed out. Unfortunately Patty and I had to get into the water and line the boats around the point before we could get in and paddle. 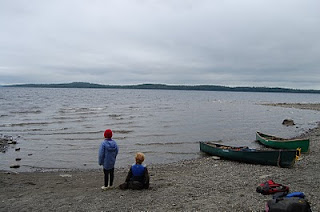 Patty and Brad practiced surfing in the waves. Sally and I watched the water crash onto the rocky islands and we enjoyed easy paddling for a couple of hours. 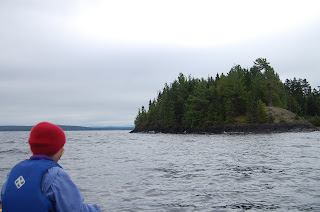 We stopped at an island to go to the bathroom and found a broken loon egg and carcass of a loon chick. 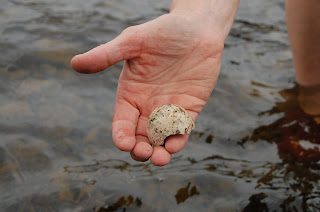 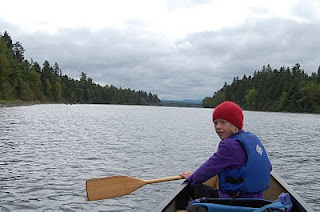 We watched the whitecaps out in the middle of the lake and observed a few powerboats trying to make headway into the wind. All too soon we arrived at Chamberlain Bridge got the car packed and headed south.
Posted by Chris at 8:21 PM