This trip was a bit of a catharsis for me. Full of hubris I set out early in the morning for a quick day trip to finish the final section of the Clyde River between Lake Salem and Newport, VT. The route description said steady class II rapids but I figured I could deal with it especially on such a small stream.

When I left Massachusetts the weather was fine but it was overcast, cool and breezy when I got up to northern Vermont. I scouted the river as I headed from Newport up to Salem Lake. The water was high and I decided that I would portage around the bend at the 105 bridge mainly because there was some Fish and Game Trap in the middle of the river and I didn’t want to get trapped in it if I dumped upstream of it. 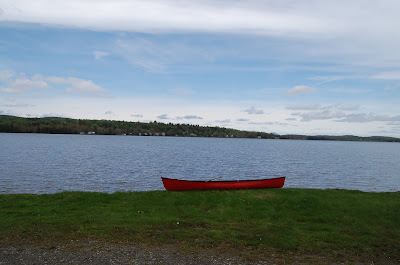 I put in and headed into a decent breeze as I crossed Lake Salem. After a mile and a half of steady paddling I reached the Cedar lined entrance to the river. It’s a pretty spot and I stopped to take some pictures. 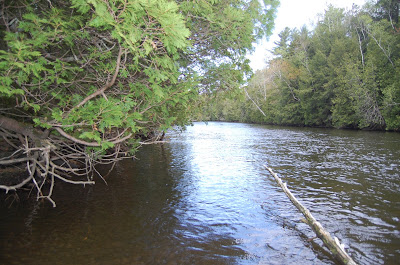 After a bout a half mile of powerful quick water the whitewater starts. After some class I I eddied out, landed and got out to do some scouting. I took some pictures of some old milk cans and put the camera away. I didn’t take another picture until the rapids ended at Clyde Pond five miles from my put-in. 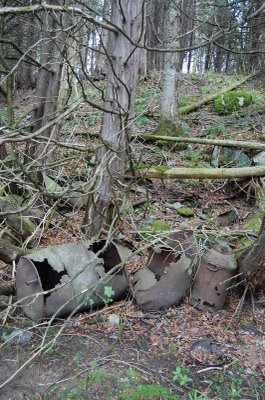 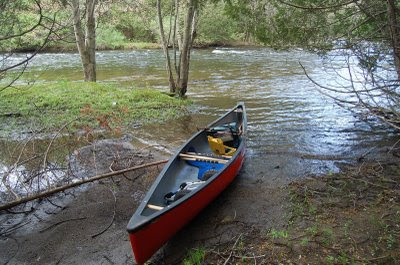 I decided to run a bit of relatively easy looking water and eddy out above the 105 bridge and scout again. The rapids weren’t bad but I overshot the eddy and ended up backwards on a rock. I slowly but surely tipped and pinned the boat. I managed to get away safely but I lost my portage cart and water bottle. I saved the camera, pack, map, and paddles.

It was touch and go for a few minutes as I wasn’t sure I was going to be able to free the boat, it seemed like any effort only made the situation worse. Fortunately I was able to lever the canoe against the rock and with a great deal of effort I got it unpinned and eventually to the shore. I was totally wet at this point and I spent some time bailing and emptying the canoe. I made the decision to keep the wet clothes on. I didn’t seem to be cold and I didn’t want to use my last set of dry clothes in case I dumped again.

I had lost my confidence so I lined down to the little park by the 105 bridge in Derby Center and prepared to portage around the nasty looking bend with the obstruction at the end. I rigged up a yoke out of paddles, and bungee and headed off. At least the exercise was keeping me warm. For the next several miles I lined, carried, dragged the canoe and even paddled a little bit in order to get to Clyde pond. In the process I wrenched my knee and was very close to giving up and limping out for help. I knew I was in way over my head and had made a bad decision to even attempt this section in these conditions especially alone. 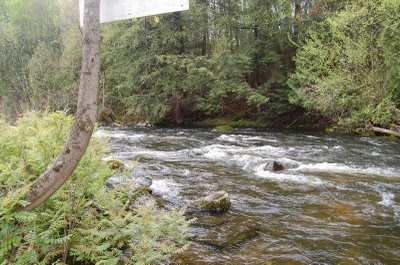 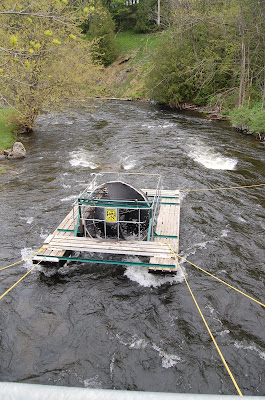 Eventually I reached Clyde Pond and a little bit of easy paddling to the dam. Once again I had to portage and buy this time I was very, very tired. 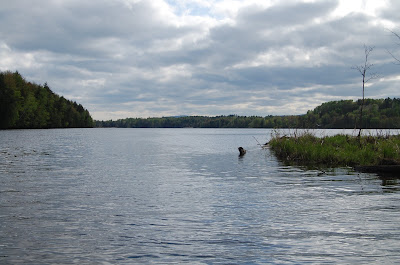 I rigged up the paddle yoke again and headed off down the road. I was soon met by a very nice gentleman out for a walk. He offered help me carry the boat but it was easier for me to carry it alone rather than having each of us carry and end. This would have been an easy one mile pull if I hadn’t lost the wheels earlier in the day. My knee was really hurting at this point but I made it to the put in and paddled the rest of the way to the waterfront in Newport. 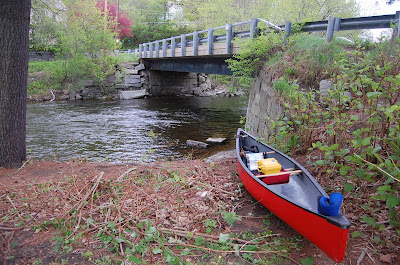 I called the local cab company but it turned out that the driver is also a bartended and didn’t get off work until 9:00pm at the earliest. I walked down to the police station but there was nobody there. I called the taxi woman back and asked if she had any ideas. She suggested I walk to a local bar and ask for a gentleman who occasionally drove some people around. So I went to the bar and everybody in the place was incredibly drunk including the bartender but he made the call and in about 20 minutes the driver showed up. While I was waiting the locals and I had a conversation. Between them being drunk and having pretty think northern Vermont accents I didn’t understand much of what was said but I nodded my head a lot and laughed when they did. After the ride to my car I bought some coffee and downed some ibuprofen and headed home humbled and tired.
Posted by Chris at 3:04 PM

Its Northern Paddlers (NFCT 08), Cranky Pants and Bean. Have enjoyed reading of your paddling adventures!

Sounds like a pretty epic trip on the Clyde - we were heading upstream on that section and portaged a portion of it because it looked rough. Glad you made it through, sorry to hear about your gear.

Thanks for the great posts! Keep on paddling!

PS - we have settled in Keene, NH and have been paddling some of the water around SW NH. Surry Dam, the Ausheulot River. Gorgeous paddling.
Cheers!