The weather on the drive north from Sebago lake was partly cloudy and windy as we headed north up to our put-in at the rte 27 bridge just outside of Stratton, Me. We shared the launch with a pontoon boat, a very friendly driver gave us an flag which we mounted in the bow of one of our canoes. It blew straight out in front of the canoe for most of the day indicating the strength of the tail wind. 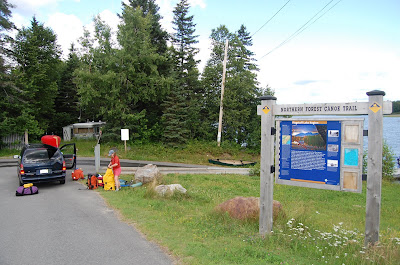 The water level in Flagstaff Lake is up, I have been told that in drier years there are lots of big beaches but we saw none on our whole trip. The first few miles are relatively protected but we hugged the north shore in an attempt to stay out of the wind. Out in more open water the waves and whitecaps were growing as the wind gained strength. We saw our first moose in a cove, a big bull with antlers dripping with water. 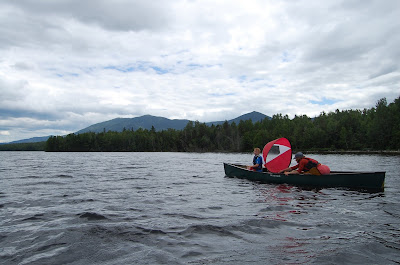 A classic moose sighting that unfortunately I wasn’t close enough to to get a good picture. He slowly ambled away, like most moose I don’t think he was really scared but perhaps the WindPaddle sail Patty was using bothered him enough so that he decided to head to the woods. 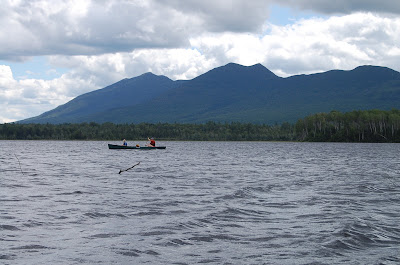 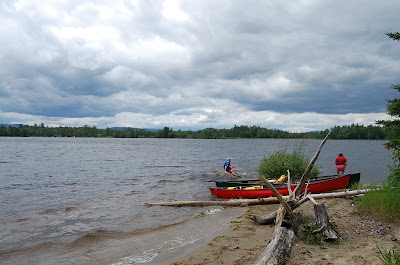 We did a short crossing to a stump lined “beach” after about 3.5 miles. We decided it would be a good place for lunch so we landed and got the food out. Even though we were standing directly in a steady wind of about a 15mph the mosquitoes were bothersome. This caused me some concern about dinner time that evening but the bugs weren’t too bad later. 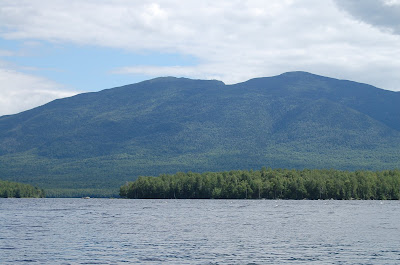 Flagstaff Lake is shapped lie a big frown so we chose to stay on the south shore until we got to Jim Eaton Hill and could follow it’s shore west. The afternoon consisted of 7 or 8 miles of paddling and dealing with various amounts of wind and waves. We were fortunate enough to see some bald eagles. The sky threatened with some ominous looking clouds but rain never materialized.

The weather was cool but we were comfortable in our PFDs. At the end of Jim Eaton Hill we paddled .5 miles across a bay with protection from the wind and then we headed southwest along the shore. From here we had to paddle with full exposure to a strong cross wind to get into the channel that leads to Hurricane Island, our intended campsite. We made steady progress while pitching, rolling, and yawing. Soon enough we covered enough distance to get into the protection of the southern shore. It figures that right about then the wind began to die down and the sky began to clear.

We saw maybe 5 powerboats all day and I lost count of canoes after about 25. We were the only non camp canoe trip, they were all headed into the wind, I hope they made their final destinations.

11 or 12 miles wasn’t a bad day. Although we didn’t cover a lot of distance I was tired from constantly correcting the canoes direction as we got pushed around by the wind. 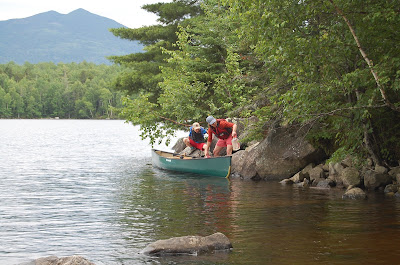 We circumnavigated the island to find the best landing spot which is in a little cove on the South side. As is our usual practice the kids were free to explore while Patty and I set up camp. 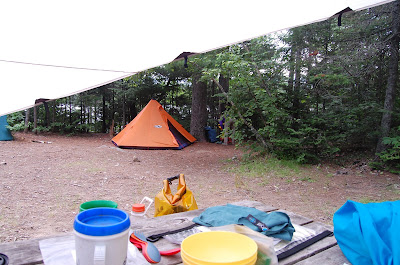 I put up the tarp and Patty set up the tent and got the sleeping stuff out. I made an attempt to start dinner but I bet two minutes didn’t go by before I had to go help one of the kids get a fishing lure out of a tree or tie a new one on. Brad caught 2 perch which made him very happy. I taught him how to remove the hook figuring he was old enough and I didn't want to have to keep doing it for him. Sally is only seven so I spent lots of time undoing tangles and retrieving stuck gear. 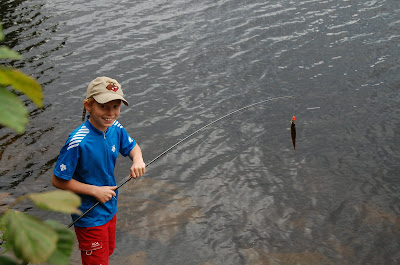 Eventually, in spite of many distractions, I got dinner cooked. Ramen with chicken breasts and veggies. After dinner I cleaned up and sent the kids out for firewood. As usual this results in enough wood for about a 10 minute fire so Patty and I did some additional wood collecting with the kids. At some point Brad fell into the lake and had to change his clothes. We had SMORES for desert and headed to bed under a clear sky and loon music.

It was great to get up to sunny skies and smooth waters. I got to have a cup o’ coffee before the kids got up and I also got a jump on organizing the gear. After breakfast we got camp taken down and packed up. I got mad at the kids for not helping at all, Patty pointed out that I need to communicate my expectations better. She’s probably right as usual. 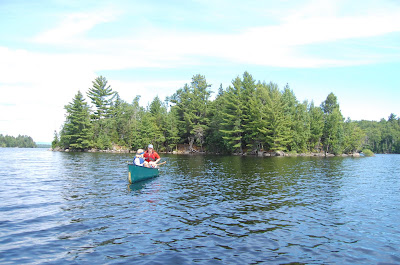 A pleasant paddle for 3.5 miles with spectacular views of the Bigelow Range led us to our final obstacle, a 1.2 mile open water crossing to the eastern shore. We stopped and the kids climbed on rocks for while Patty and I did some map and compass work to make sure we were headed to the right place. We were in time killing mode because we had a short day, probably only 7 miles from Hurricane Island to the new Flagstaff Hut. 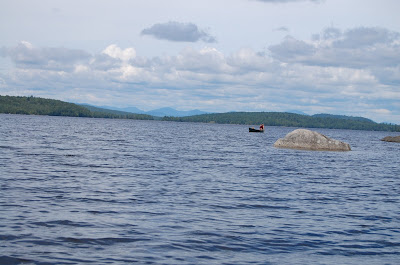 The crossing was uneventful except that the wind decided to pick up a bit to make it interesting. It wasn’t nearly as strong as the day before but it was a direct cross wind so we had to fight a bit to maintain a straight course. We ended up at 1 mile beach which was, because of the water level, 1 mile dry-ki. We swam and had a leisurely lunch, I would have napped if I could have. 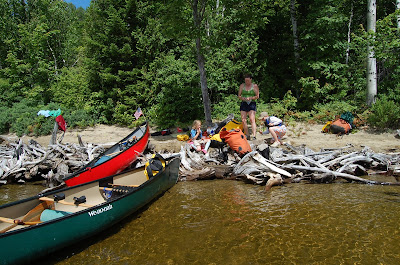 Our next objective was finding the hut. From doing research I generally knew where it was but I had heard that it wasn’t visible form the lake. We paddled north along the shore and headed into a cove where I thought I heard a generator. I later learned that it was the huts generator and they were doing some maintenance on their solar electrical system and were balancing the batteries. We paddled out of the cove, around the point, followed the shore and eventually discovered the dock. Sally and Brad headed up to check things out while Patty and I unloaded gear and got the boats up on shore. The kids helped carry gear up to the check in. 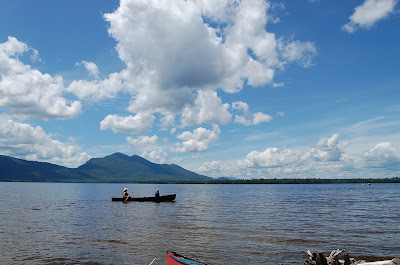 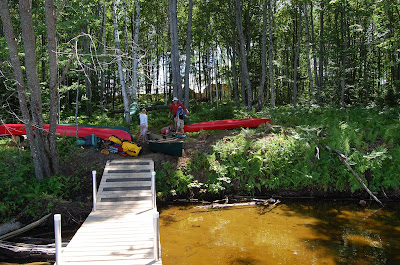 The hut is beautiful and well worth the stay. It cost us $185.00 and included a 4 person bunkroom, dinner and breakfast. 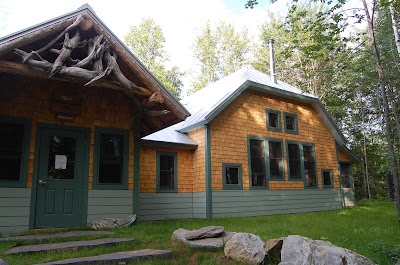 The staff was friendly, knowledgeable and very accommodating. They have nice bathrooms and showers, the food was excellent and plentiful. After checking in and getting settled I read and took a nap, I’m not sure what the others did. My cousin and his wife and son shuttled our car and then walked in for 2 miles to have dinner with us. The staff let us eat on the screened in porch. After dinner we talked while the kids played hide and seek and generally had a great time. 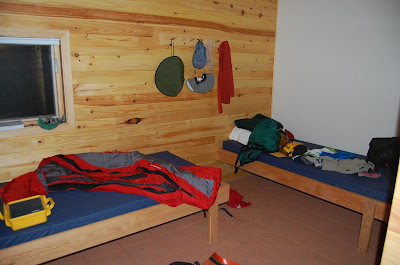 The next morning we got up and had a great pancake breakfast before loading up and heading north to the takeout at the boat launch just above Long Falls Dam, about a 2 mile paddle. We packed up, looked at the seaplane that was tied up and then drove to below the dam to look around and scout a future trip. 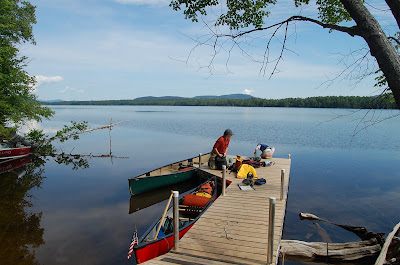 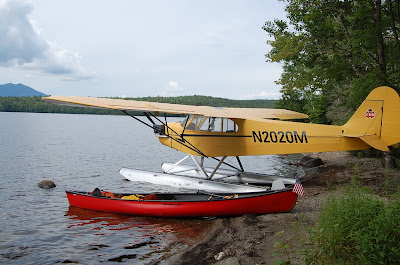 Oh my goodness! That looks like so much fun! Great pictures!

I found your site through a search of "the gill family". We're are Gill's too! My husband and his family are from Northern Ireland.

These articles are fantastic; the information you show us is interesting for everybody and is really good written. It’s just great!! Do you want to know something more? Read it...: Great investment opportunity in Costa Rica