We had learned the day before that the water in Chesuncook was down 12 feet and was going to be lowered another 5 feet so that the dam at the south end could be worked on. This explained the extremely low water levels in the lake. We woke to nice calm weather and had a pleasant breakfast and un hurredly broke down camp, loaded the boats, and started out for the day. I was, of course, aware of the weather approaching from the east, it was to grow steadily worse all day. 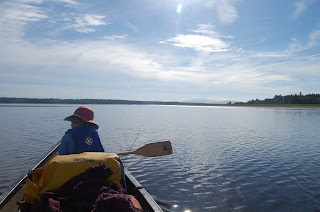 The initial paddling was windless and pleasant, not unlike low tide in a marsh. As soon as we passed around the point and onto the North end of Chesuncook Lake we were greeted with a strong southerly wind which hit us broadside and made the paddling difficult. We both were blown onto the beach on more than one occasion and Patty and I had to fight hard to make decent headway. Gradually we progressed into the lee side of Gero Island and the traveling became much easier. We were sheltered from the wind until well into Umbazooksus Stream where we had a tail wind to help us forward. 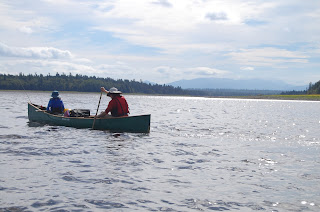 At the northeast end of Umbazooksus Stream one can normally paddle under a bridge and work their way up do the decommissioned dam at Umbazooksus Lake. 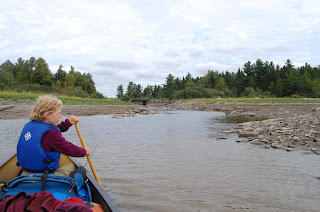 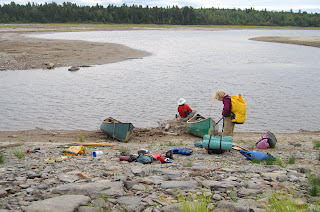 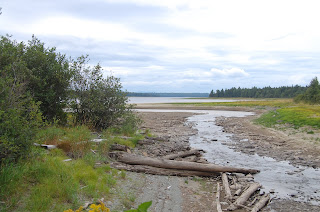 Due to the low water levels we were forced to disembark well below the Longley Stream Bridge and then portage east on the road until we could turn north on an obvious side road and re-enter the water on Umbazooksus Lake. We had lunch at the start of the portage. The South end of Umbazooksus Lake is shallow and filled with long abandoned pulp logs. 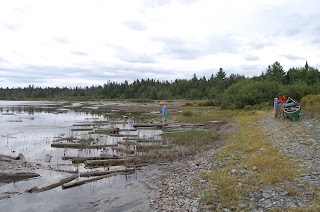 After a short paddle through the reeds we reached the west end of the fabled Mud Pond Carry. Both Brad and I were excited to see what this was all about, Patty and Sally, not so much. It began to rain, how appropriate. Time to make some decisions, we reasoned that we could camp here if needed and would look for better options as we started the carry. On our first trip we would bring the canoes and everything paddling related and leave the sleeping gear, food and cooking gear for later trips reasoning that we could return and camp for the night if needed. So, up with the big green umbrellas and off we went. 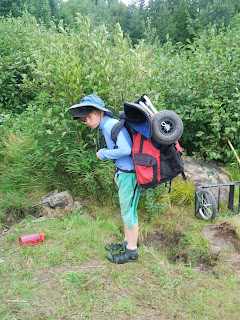 The first section up to the road is rocky and dry(ish), about 250 yards in there’s a good campsite on either side of the trail by some old 55 gallon drums. Once you get to the road the water and mud begin. From here to the height of land there are sections of water and mud, some worse than others. In some places you can walk on the side of the trail and stay out of the worst bits but in other places you have no choice but to walk knee deep in the mire and muck.

These wet sections are not continuous, there are also sections of better and drier trail to walk on. When carrying the canoes it is probably best to just walk in the middle of the trail and not waste energy trying to avoid the nasty stuff, the trail is often very narrow so you'll have no choice. 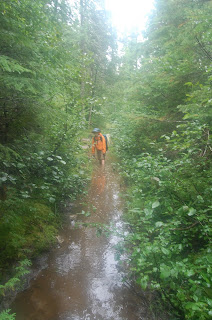 Once you near the height of land the trail dries out to a beautiful gravel path through a lovely mature forest, enjoy this section. This is the half way mark so when you start down and the water flows east toward the Allagash you will know you’re more that half way done. 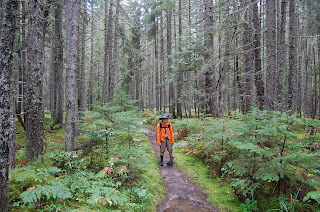 When you reach a clearing on your left you have about half a mile to go, the worst water is just before the end.

There are no steep sections on the trail; it's gradually up and then downhill. There are occasional blow downs but only one or two are at an inconvenient height. At the east end there are two overhead blow downs that are a real pain in the ass. The trail is really to narrow and the water section to short to make floating the boat an option. I don’t think it would be worth the effort to get the canoe off your shoulders and then back on just float the canoe a few feet, your opinion may be different.
You're going to get muddy and wet so accept it and don’t waste energy trying to avoid it. Wear shoes that are snug on your feet, some of the mud will try and suck your shoes off, don’t even think about wearing Crocs. If you have a bow saw you could clear some trees for huge karma points. Once you reach the end you'll still need to post hole through the muck in Mud Pond in order to reach water deep enough to paddle so don't change clothes right away. 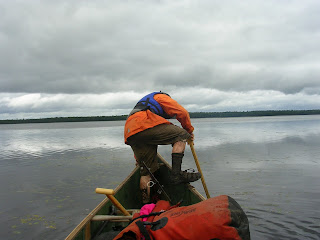 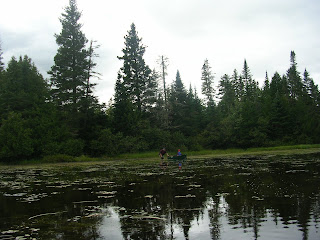 It took Patty and I an hour and 15 minutes to do the carry with the boats, we took our time and rested as needed. The rest of the trips took about 45 minutes.There's a very nice, small, grass clearing on the eastern end to leave equipment at, it would also make an adequate camping spot if necessary.

We were all soaked to the skin when we arrived at the east end and Sally was starting to show some signs of hypothermia so we headed back right away, Brad and I took about 40 minutes for the return. By this time there was a hard and steady rain so we quickly set up the tarp and then the tent. We stripped the kids and Patty put them into warm dry clothes and then into sleeping bags while I boiled water and made soup and then dinner. The kids were warm and happy especially because they got to eat inside the tent, something I never let them do. We read how Thoreau got lost on the carry and discussed how similar the conditions still are 150 later.

If you are into fungus and amphibians of northern Maine this is the trail for you. We saw several different frogs and toads as well as three Spruce Grouse. There are lots of different ferns, mosses and lichens growing as well. I must have seen a dozen different types of mushrooms.

Patty was excited to experience the Mud Pond Carry. The spirit and history of the trail fasinates her. This mud carry section draws the paddler in with all the lore of past travelers. Patty embraced the challenge. Just image Henry Thoreau's guide "Joe" trudging the carry with his canoe, cotton pants, leather shoes and then going out to find his lost clients. Modern ammenities and an eight year old singing as the mother/daughter duo splashed back to set up a tent with dry polyfiber materials waiting to warm us. Best of all boiled water added to a pouch created a gourmet dinner. The tent was cozy that night. The worse part of the entire carry and trip was when Patty sat on her eye glasses. Not only did her shoulders throb from the rubbing of the canoe but her wallet was dented when the eye glass frames snapped.