Rockwood to Chamberlain Bridge Day 3 and 4

Patty and I were well into our morning routine by the third day. It’s nice to peacefully prepare breakfast, sip coffee, and start packing gear before the kids get up. This morning was nice with broken clouds and sunlight occasionally lighting the opposite shore. The wind was calm and the water quiet. We got going early in anticipation of getting off of Moosehead and onto the West Branch. 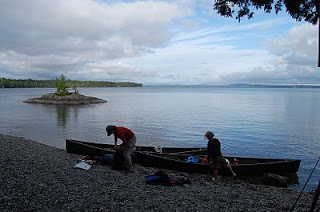 The paddling was very agreeable and the shore was craggy and interesting as we headed north. We were sheltered from a Northeast wind by Norcross Mountain. Along the way we saw two very interesting things. The first was a brand new beaver lodge on the rock shore of the lake. I cannot see how this beaver is going to survive the winter especially if the water level fluctuates and the ice moves around at all. My guess is that it’s a yearling animal that is in search of a place to settle down. We did get to see the beaver do the tail slap thing. We moved on to leave him in peace in his new house. 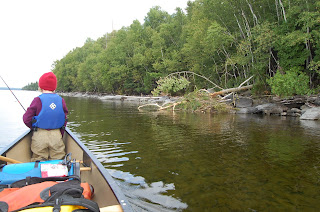 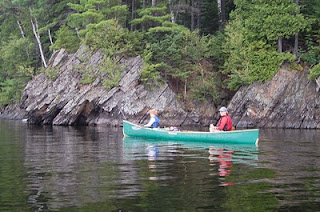 The second event was much more interesting. There are lots of Spotted Sandpipers on the shore and we observed them regularly. At one point a small hawk, probably a Coopers, attacked one of the flying sand pipers, we had great seats for the show. The sandpiper dove into the water and totally submerged for a moment, he then floated with just his head out of the water. After a few seconds he took off and the whole process was repeated again. After the second failed attempt the hawk headed off towards Kineo and the sandpiper returned to hunting along the shore. It’s not very often you get the chance to see a real life hunt in the wild and we discussed and theorized about it for quite awhile.

As we neared the northeast carry the camps and homes became frequent and Sally and I discussed what we liked and disliked about all of them. The large white house at the start of the carry is a beacon that seems to get closer only very slowly. The wind was no longer deflected by any hills so we fought a crosswind that made the paddling more difficult.

Eventually arriving at the start of the carry we unloaded the boats and set them up on the wheels preparing for the two mile walk (640 rods)on the dead straight road over the gentle divide. All the while we talked with some folks who were very curious about our trip. The people were very nice and very inquisitive about our family vacation. 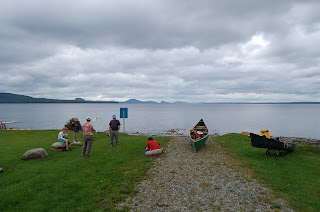 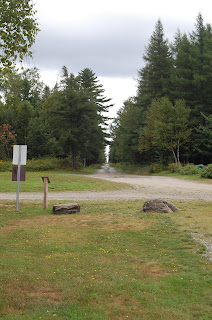 This is a very easy portage with wheels as it's a very gradual up hill and then downhill with only a little bit of roughness at the end. We almost immediately passed a couple of large bear scats in the road, its berry season the ursus kingdom. 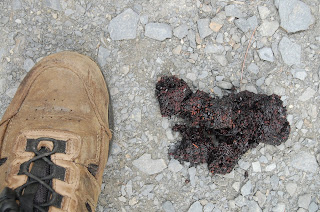 We had hoped to stop at the general store along the carry but unfortunatly was closed. Brad did a great job pulling a boat by himself and occasionally Sally rode along in top of the gear. 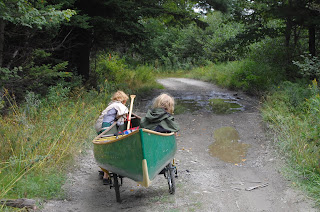 The put in at Pittston Farm was spacious and we had lunch while we reorganized the boats for the afternoon. We met a nice family doing the trip up to Lobster Lake and we swapped stories about camping with kids. Unfortunately the wind had picked up and we spent the first hour or so paddling into a head wind, I’ve paddled in worse and with the help of the current we made good progress. 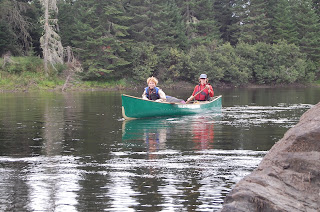 At the turn off to Lobster Lake the river veers north and the current picks up. We floated and fished for the final two miles to Thoreau’s Islands which we found empty. I did some fishing above the bridge at Hanibal’s Crossing and caught 5 fish in six casts much to the dismay of Brad. After grudgingly helping us get the packs up to the site the kids were free to do whatever they wanted while Patty and I set up the tent, tarp and got going on dinner. 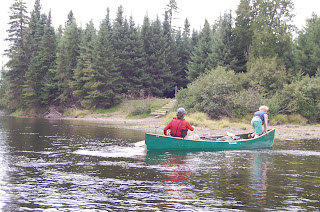 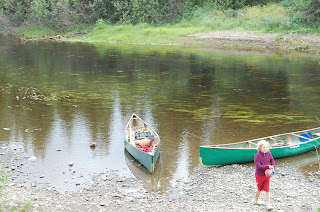 We had tuna helper for dinner along with some vegetables. I burned the milk and Patty took over the cooking while I pumped a gallon or so of drinking water. The island seems to have a large and healthy Red Squirrel population and I amused myself watching them race around the campsite. We had plenty of wood for a fire and got to bed early for some reading and story telling. 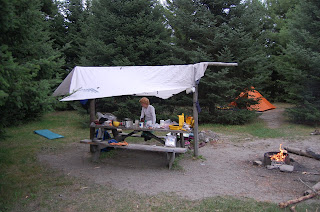 This one of those perfect days that happens occasionally on a trip. I woke early to a heavy dew, fog, and a temperature of 42 degrees. It was a good morning for hot cereal and hot chocolate as the fog slowly burned off and the mist rose from the river. We started out early paddling in magical sunlight and perfect conditions. 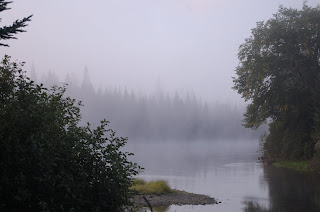 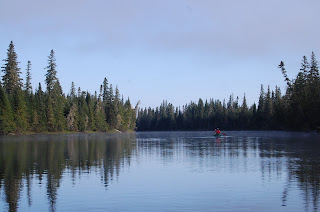 The day alternated calm sections of flowing water with great, easy white water sections. Brad and I saw an animal swimming across the river and tried to figure out what it was from a distance, it was small. A mink, an otter, muskrat, small beaver? Nope, it was a red squirrel! We laughed about this and tried to figure what would prompt it to attempt such a dangerous mission, after all we had seen plenty of bald eagles and hawks that would love a nice easy dinner. A little later on we saw a second one and this time I got pictures. 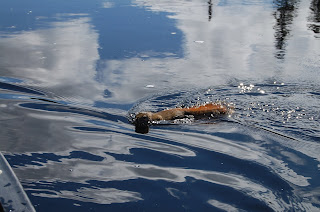 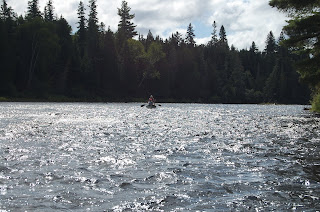 We checked out many campsites all of which were vacant. The sky was blue, there was no wind, the current was strong, and overall it was an incredible section of paddling. We stopped for a nice lunch at some flat rock in a bend in the river and then again shortly later to use the outhouse at one of the many great campsites. 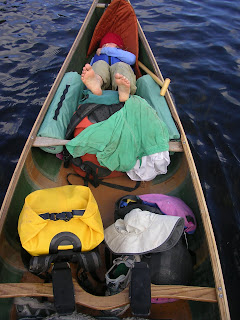 Soon the river entered Chesuncook Lake and we were paddling current-less flat water again. There was only a minor headwind with beautiful scenery and pleasant paddling. The water seemed very low and we observed lots of signs of the old logging operations that used to take place here, I think we even paddled a set of rapids that only shows up in these rare low water conditions. 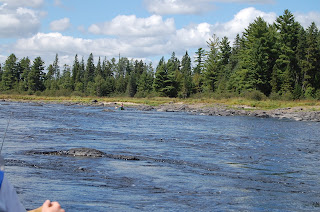 We arrived at Boom House Campsite at about 3:00pm; the site is named after the house that protected the winch that controlled the log boom at this location. I told the kids it was named after the sound that the house made when it blew up but they didn’t believe me.

The landing was very muddy and it was a pretty long way up to the site because of the water level but we were soon set up and ready to walk into “town” for root beer and fudge at The Store. There’s a sign that says Store and points to the outhouse but it really is pointing to the path that starts behind it. After a pleasant walk of about a mile we came to The Store which is very hard to miss, unfortunately they were closed for the day to go to doctors appointments. The kids were upset but a neighbor told us to keep walking to the Chesuncook House because they also sold soda. I’m glad we did because we got to see the church and the rest of the town. 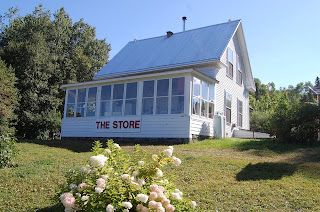 Two of the owner’s kids were out in the yard spraying each other with fire hoses when they were supposed to be watering the garden. Mrs. Surprenant was busy canning vegetables but she was happy to sell us some home made home made birch beer. We sat on the front porch and looked at Katadin in the distance and hummingbirds in the foreground as we drank our sodas. 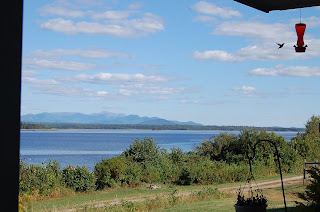 We realized how disgusting we were and headed back to clean off in the river. The trail back has several relics from the logging years. 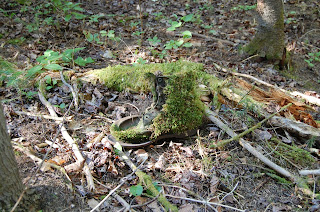 We swam in the river cleaning the grime and sweat off in the process, had a nice dinner of Ramen and vegetables, and watched the sunset under a cloudless sky, I had nothing but high expectations for the following day. 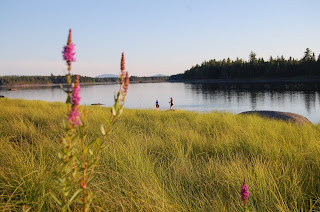 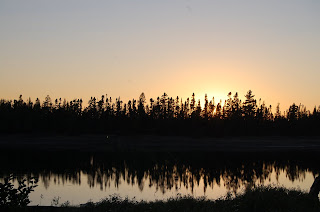 At 3:00am I awoke to prove that I had re-hydrated sufficiently and noticed some cirrus clouds moving in, not a good omen.
Posted by Chris at 4:17 PM