Rockwood to Chamberlain Bridge Day 1 and 2

Day one, Rockwood to Hardscrabble Point.

After a long drive up to Rockwood we were forced to sit on the lawn at the public landing and stare at the cliff of Kineo. Although the crossing is only about a mile there was a considerable wind out of the north and whitecaps were common. The consequences of a capsize here are serious because you could be blown many miles south before reaching land. Moosehead narrows down at this point and then opens up again south of Kineo. It would be stupid to take any unnecessary risks at this point especially with a ten and eight year old. At one point we forayed out into the crossing but I was very uncomfortable in the choppy water and we decided to return to the grass to wait for the wind to abate. 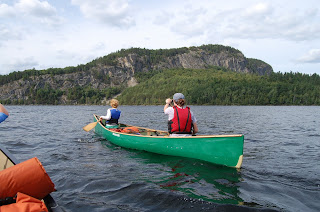 Eventually, later in the afternoon, the wind let up and we made the crossing and then headed up wind, along the west shore of Kineo. The water was choppy but not to bad, the wind was strong enough so we struggled a bit as we headed north. The first campsite we came to was at Hardscrabble Point, a two unit site with one site open. Since it was Saturday night and the next site was several miles north with another large crossing we decided too take the site after a very short day on the water. Even if we had continued there was no guarantee that we would be able to find an open site in Big Duck Cove 8 mile further north. 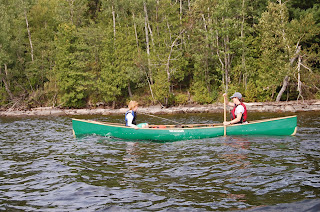 We set up the tent and tarp and got a fire going and started on dinner, soup with noodles, sauted vegatables, and chicken. The kids explored, fished and skipped stones. We were visited by an older couple from New Jersey who told us stories of canoe camping with their kids when they were younger. We went to bed around nine after reading stories to the kid including excerpts from Thoreau’s Maine Woods. I woke at night to listen to two barred owls calling back and forth, one on the back side of Kineo and the other on Farm Island. 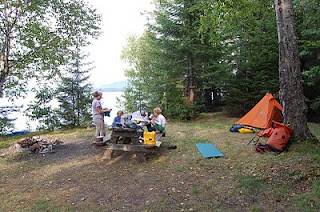 We decided to paddle only as far as Big Duck Cove today, about 8 miles. Once past there the next campsite would be Thoreau’s Island several miles down the West Branch of the Penobscot after the 2 mile North East Carry. This would have been a demanding twenty plus mile day for the kids and since we were in no rush we decided to have another easy day on Moosehead.

The weather was overcast and calm when I woke at about 6:00. Our morning routine is for Patty and me to get up, make coffee, and start on breakfast. We can usually even get some of the packing done before the kid wake up, usually around 7:00 or 7:30. The breakfast menu is premixed granola and powdered milk and hot cereal and hot chocolate are available if wanted. While the kids eat one of us packs up the sleeping gear and the other takes care of the kitchen.

Once we have everything in bags the kids help carry things down to the boats and we load up. We try to make sure there is lots of snack food available and the lunch is easy to get to when we need it. We fill the canteens with drinking water and make sure appropriate clothing for the expected weather is on top of the dry bags and available if needed. The kids alternate days canoeing with Patty or me. 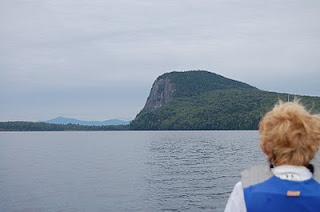 We started paddling about 9:00 and headed around the backside of Kineo and across the bay towards the east shore, there’s a nice view of the cliffs from behind. It was a nice paddle along the shore in calm waters. Brad had a Mayfly land on his hand, we passed a lone apple tree on the shore full of apples, and there were some interesting old piers to look at. We discussed the life cycle of aquatic insects, tasted the apples which were very tart and unappealing and talked about the history of logging and farming on the lake. 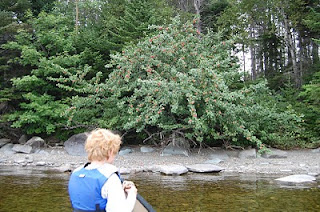 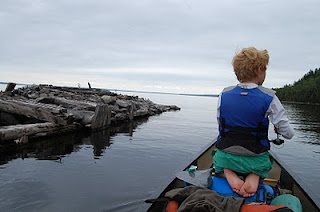 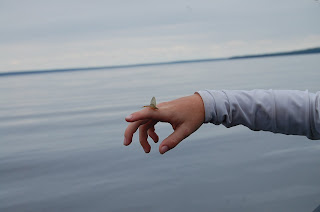 At about noon we entered Big Duck Cove and began to look for open campsites. The first one we came to was on the south shore and we decided to look for one further along. All the sites on the other side were taken but one of the groups was leaving. We spoke with them and they agreed to leave the fire going and leave all the extra firewood for us. Great. It began to spit rain but soon stopped, the tarp and tent were quickly up and the kids had a great time exploring on the pebble beach. They each walked out to the nearby island and took the canoes out for solo paddles. Dinner was early and so was bed because tomorrow was going to be a longer day. More barred owls and some coyotes yipping at night. 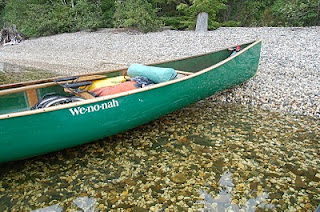 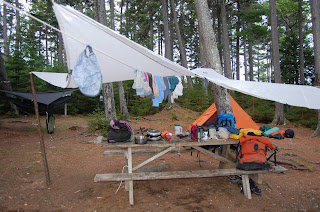 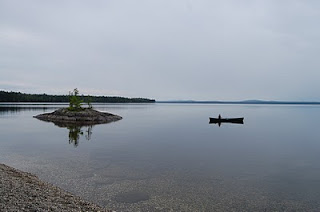